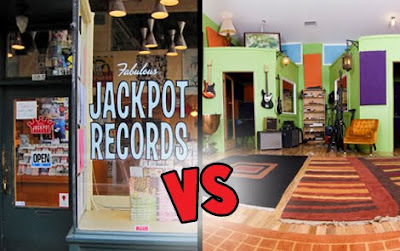 "I opened the first Jackpot Records store on SE Hawthorne Boulevard in October 1997," owner Isaac Slusarenko recalls. "I don’t think I had met Larry yet, but I knew of him through my brothers and that he had worked on music with a lot of people I knew."

"I knew his brothers Nate and Chris fairly well," Crane continues, "and had even offered to fill in on bass for their band Svelte on a EU tour that spring, though that didn’t happen. While they were on tour I opened the studio. Nate called me one day after that, and I said, 'What’s your brother’s problem? He stole my name,' and Nate said it was his fault but that everything was in motion."

It was Nate's "fault" because he "came up with the name Fabulous Jackpot Records based around Las Vegas-inspired designs for the interior" and "also designed our logo," Slusarenko explains.

"So we just agreed to cooperate. I met Isaac and he sold me some Pink Floyd albums and everything was okay," Crane adds.

And that's been that. Now fifteen years later, who could've imagined the impressive and varied contributions the two homegrown, homologously named establishments would have on Portland's music industry, scene and culture?

Crane's studio has hosted greats from the NW and beyond like R.E.M., Eddie Vedder, M. Ward, Portland Cello Project, Death Cab, Sonic Youth, Sleater-Kinney, Spoon, The Shins, Stephen Malkmus, The Decemberists, The Gossip, Wild Flag, Quasi, and most importantly Elliott Smith, while Slusarenko's stores have sold these records, hosted many of the bands (and hundreds more) at in-store performances, and re-issued rarities, unreleased tracks and new music from The Wipers, Jandek, Dave Depper and Crock on the Jackpot Records imprint.

Fifteen years in, Crane and Slusarenko only share a name and a friendship, having not “cross-pollinated” over the years, according to Slusarenko.

"This anniversary party is the first project we’ve done together," Slusarenko says. 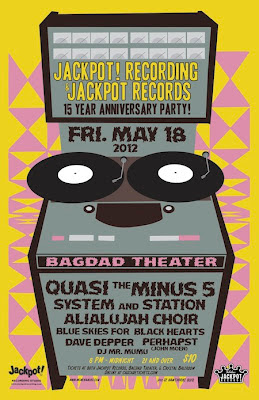 Slusarenko is referring to the show he and Crane will throw at the Bagdad Theater on Friday, May 18th featuring performances from a cast of Portland artists that have recorded at Jackpot! Recording Studio, or released records on Jackpot Records, or simply had albums for sale at the record stores. The lineup includes Quasi, The Minus 5, System and Station, Alialujah Choir, Perhapst (John Moen of The Decemberists), Dave Depper (Loch Lomond), and Blue Skies For Black Hearts.

OMN had the chance to catch up with both Crane and Slusarenko as their 15th anniversary approached. Discussing not just the party but also the history of the two establishments as well as current and future plans, the following is a combination of the two conversations.

After 15 years of running your respective businesses, do you guys feel like you've contributed something significant to the Portland music scene?

Larry Crane: Absolutely. I felt like a certain niche of studio was missing in 1997 and we [Jackpot! Recording Studio] filled it. So many great local records have been done here, and when people compile lists of best Northwest albums, stuff we worked on is all over that list. I think Isaac has done a great job of presenting a curated record store. If you look at my three favorite stores in town, Music Millennium carries a large stock of everything, Jackpot has more indie/psyche/soul/collector stuff, and Exiled Records has the wildest shit and a ton of vinyl. I go to them all and am friends with the owners.

An important thing to me is to respect the past of Portland's music history, but to also understand that everything moves forward. New music is being created all the time, and it could end up being as important as anything from our past. We have to be aware of this, nurture it and support it. The last thing I wanna be is some old guy sitting in my studio rattling on about the glory days. I do have a fondness for some events of 15 years ago, but I'm always excited to work with new artists and treat them all with respect and care.

Isaac Slusarenko: Yes. The Jackpot Records record label started with reissuing Beauregarde's self-titled [Beauregarde] on vinyl. Beauregarde was a well-known Portland wrestler who wrote, sang and created this psychedelic soul masterpiece back in 1971. It doesn’t get much more obscure than that. We have reissued The Wipers' catalog on vinyl, the first time [it's been available] since 1978. The Wipers influence is still being seen in Portland bands and beyond. We also have The New Dawn's There’s A New Dawn from 1970 and Salem, OR, on CD and an upcoming a vinyl release.

Were you ever concerned about branding problems? And over the years, have there been any issues because of the similarity of the two names?

IS: Nah. I don’t think either of us think it’s a problem. We’ve joked about it for years. It’s kind of flattering no matter which way you go; it’s like a mutual appreciation society. We both get phone calls occasionally, but it’s been a while.

LC: We used to get calls from old folks trying to get rid of their valuable Perry Como albums, but not much these days. We always set callers straight, and I know Jackpot Records does too. The most amazing thing was when the owner of a record store that used to be in Isaac’s first space called me and told me to sue Isaac! I was mortified.

IS: With our websites, people can usually figure out the difference between the studio and the stores, however, the perception is still out there. Like an urban legend.