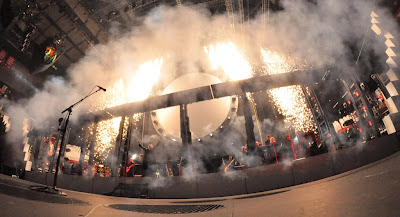 "It's meant to be a piece of theater. Don't really look upon it as rock 'n' roll—this is theater," Roger Waters said of his The Wall Live in a 2011 video interview previewing the record-smashing, current tour.

So when a series of red flares shot skyward before Waters and a cast of 11 musicians set foot on the Rose Garden stage on Tuesday, May 22nd, the two-plus hour show (intermission included) was not a concert. It was a monumental spectacle of gargantuan puppets, dazzling 3D projections, scorching pyrotechnics, and costumed actors all set to the soundtrack of one the world's most enduring rock operas: The Wall.

If you really want the comprehensive play-by-play of the show, Wikipedia gives you as many details as you could ask for. But experiencing The Wall Live is like no other concert you've seen before—or will ever see again.

The bar has been set—even though the set list was a given, many of the images were familiar, and even the action on stage was predictable for any Pink Floyd fan lucky enough to have witnessed one of the 31 original The Wall Tour shows in Los Angeles, New York, Dortmund or London or aficionados privy to subsequent documentaries or bootleg footage.

Now 30 years later, Roger Waters literally resurrected The Wall for a second U.S. and Canadian leg. And on Tuesday, as The Wall was constructed in Portland, Waters revised the original 1979 message of isolation to emphasize governmental and social issues: war, terrorism, capitalism, poverty, and hunger—slashing each with a big red X.

The message, principally projected across the white wall, encouraged unity while empathizing with others and feeling raw emotion—within ourselves and recognizing it in others, whether they were sitting next to us in the arena or suffering half a world away.

Waters says the modern production "substitute[s] the word wall for the word border"—both national and ideological borders—and our ability to communicate across them. So, amongst the gunfire, Nazi-inspired soldiers, and illusory helicopters sweeping through the arena's audio channels, there were also sincerely touching displays of grief and compassion, loss and love as the faces of fallen family members—soliders, women in headscarves, children, and most notably the Brazilian Jean Charles de Menezes who was shot in the head seven times at Stockwell Road Tube station in London—lost in conflicts were displayed during the "The Thin Ice" and intermission.