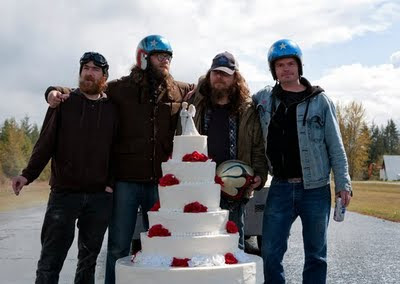 If you haven’t heard of Red Fang yet, you must be living under a rock… rather than, you know, listening to your rock. Portland’s favorite metalheads have long been preparing for the release of second album, Murder The Mountains, which came out on April 12th via Relapse Records. Produced by The Decemberists’ Chris Funk and mixed by the Grammy-winning Vance Powell (The Raconteurs, The White Stripes, Kings of Leon), Red Fang brings some fresh depth to their plug-in-and-shred metal, adding Queens of the Stone Age grooves alongside raw, headbang-worthy instrumentation.

The stoner metal foursome has been playing together since the fall of 2005, rocking their first gig on December 31st, 2005. Since then, Bryan Giles (guitar, vocals), Aaron Beam (bass, vocals), David Sullivan (guitar), and John Sherman (drums) have made a home for themselves at Dante’s over the years, yet lately, it seems like they’re out growing those digs. Paying their dues over the years and getting on as many tours as possible, Red Fang most recently shared the Roseland stage with Helmet and five others for the inaugural Metalliance Tour, and they’ll spend this summer touring extensively in Europe as well as rocking Hellfest in France and cities across the US on the Mayhem Fest tour.

But first, there’s a headlining gig of their own, to celebrate the release of Murder The Mountains on Saturday, April 30th at Branx with fellow Portland rockers Mongoloid Village, Lord Dying, and Drunk Ladies.

And while we’re still waiting for the band to reveal the first music video (a Whitey McConnaughy-directed–the man behind “Prehistoric Dog”– and Brian Posehn cameoed joint) from the new record for “Wires,” which you can listen to below, the band has been dropping hints of what’s to come.

OMN caught up with bassist/vocalist Aaron Beam a few weeks ago to discuss the new album, label, video, and upcoming plans, like playing in the sky.

These days you guys seem to be constantly in motion. And you’ve got more dates booked for this summer in the US and Europe with some legendary metal and hard rock names. How has this success happened? It it new label support?

Aaron Beam: It starts of course with hard work on our part. Having played music forever, we’ve made a lot of friends over the years, and we try not to be assholes; we try to be a good band. This most recent kind of success, or whatever you wanna call it, I think is pretty strongly related the manager that we just started working with, Laurel Stearns. A combination of her and having the label support because Relapse has been really great. So I think it’s just being on a higher profile label and having a manager who’s really working hard for us is naturally the turning point. And we’ve got a great booking agent too, and I think having all three things together is what’s really making the difference.