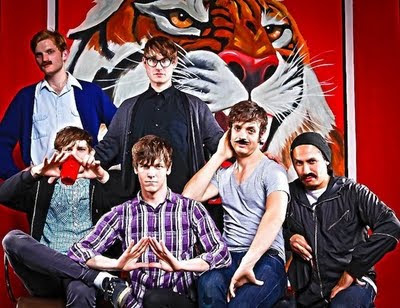 Since OMN last checked in with Starfucker before their biggest hometown gig ever, there has been an album release, an arrest at SXSW, and lots of touring in between. Yet, there has not been a proper Portland release gig for the long-awaited second Starfucker album, Reptilians, which came out in March on Polyvinyl. But rather than simply play one show to celebrate the release, Starfucker will play back-to-back-to-back nights at three PDX venues, completing more than a month on the road–their most expansive tour yet, which covered the entire US plus a recent stop in Vancouver, Canada.

Like any band on tour, Starfucker’s current 30+ show jaunt was not without its own adventures and adversity, and the guys documented it well on their active Facebook, Twitter (where you can play 20 questions), and pet-friendly Tumblr accounts.

There was Ryan Biornstad’s “B.S.” arrest for something akin to “jaywalking” at SXSW, for which the charges were dropped on April 15th, and the subsequent sale of fly, new “FREE RYAN” tees because although “Ryan does not have to go back to jail, he still has to pay a lawyer,” the band Tweeted. “We’re selling special shirts on tour to raise money for him.” All proceeds from the sales of this shirt will go to pay his legal fees, which you can help pay here.

Then, immediately following the SXSW debacle, the tour van broke down and the band arrived in Houston via tow truck. Thanks AAA!

But, on the plus side, there have been tatted fans and three broken keyboards… so far. See here.

“Fuck, had to by another keyboard. That’s 3 this tour.. Hate Guitar Center, love their return policy though!! #returnitaftertour.”

The hijinks never end when Portland’s most lovable electro-miscreants take to the road; they even managed to fit in the filming of a hooded, cloaked and caped video for ”Julius” somewhere along the way.
As of Monday, the band had sold out nineteen gigs, and now they’re well into the twenties as they’ve already sold out all three Portland gigs; although, if you’re lucky, you might be able to snag a ticket at the door as these venues often hold onto a handful. And in case you can’t remember where you’re seeing Starfucker, and on which night, or have no clue who’s opening (unfortunately Unknown Mortal Orchestra has been called off to open for the Smith Westerns instead of opening the Holocene gig), get your important info here:

The above venues will satisfy Starfucker’s desire to play smaller, sweatier gigs, and you can expect a set heavy with crisp Reptilians cuts, an album written...
---
Read the rest on OMN.
Posted by pdxnoise at 07:59