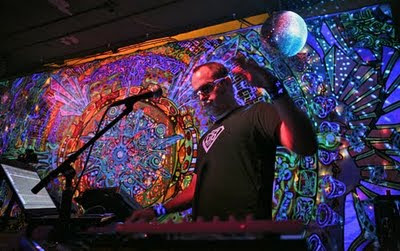 With the relative ease of production and syndication, it’s easier than ever to be a one-man band, recording in your bedroom and then adapting it for Portland’s stages. And with electronic music, specifically riotous dance parities, exploding worldwide and finally catching full blaze in the states, one of Portland’s electronic pioneers is turning 10.

Solovox, real name Carl Tietze, is one of the area’s original solo electronic music performers, producers and gadgeteers, kicking it off ten years ago in May of 2001 at Ohm. ”It’s hard to believe I started with seven keyboards and a stage full of gear,” reminiscences Solovox.

With Ohm now defunct, Solovox will celebrate his 10 year anniversary at the Someday Lounge on Friday, May 13th with a crew of dancers, including the aerial performance group AWOL Dance Collective, the acrobatic group Kazum, The Good Time Girls, and Solovox’s own dancers, plus performers like DJ Manoj and Mr. Wu supporting on the decks. Performing two sets, more guest appearances will come from vocalists and instrumentalists like Jason Wells of M4 Marching Band, Enrique Uvalde of Soriah, and Jen Folker from Dahlia.

So what’s changed in 10 years? Let Solovox tell you.

You emphatically say you’re not a DJ… and I can understand that you’re a combination of an electronic composer, and musician plus DJ, remixer and more. So, what do you call yourself?

How has your style evolved in the 10 years you’ve been doing this?

Immensely… my original tracks now are between 75 bpm and 110bpm… anything faster is predominately a remix of a dance track that I expand upon and add layers to. In other words, it has split into two different categories… I may one day just create a different moniker for my “slower” tracks and keep Solovox a “dance” act. Beyond that, I have become more tasteful and less “fiddly,” but the truth is I wank hard when the energy is high. Can’t be stopped.