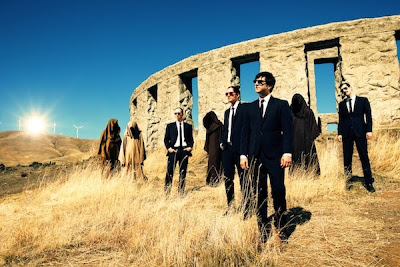 Portland's chameleon indie rockers Blue Skies For Black Hearts are poised to unleash their fifth long player on Tuesday, April 19th followed by a celebration at the Mission Theater on Saturday, April 23rd. But Embracing the Modern Age is more than just a poppy collection of classic-sounding and modern indie rock cuts, it's also a film starring the band (directed by Jon Griffith) and a multimedia experience (although hesitates billing it as such)."It's not going to be a normal rock and roll show that's for sure," remarks lead singer/songwriter Pat Kearns. "We have a lot of strange things planned. It's going to run like a cabaret or theater show, so please be on time. We're using the movie screen a lot during the show... and it interacts with the audience. Maybe kind of like seeing The Rocky Horror Picture Show or Pink Flamingos. And all that happens before we even show the film. It's going to be a happening."The album itself features a menagerie of styles from the de-funkified yet obviously Stones' "Emotional Rescue"-influenced title track to BRMC-inspired grit ("Damn Those Girls") and bouncing, harmonized pop ("Deck of Cards," "Sitting on the Edge") and wonderfully jangly, sing along bop, like on the first single "Majoring in the Arts":The above track "revolves around a food cart romance--a uniquely Portland experience," says Kearns. Adding that the album explores "the gray areas that I encounter in my day to day life as a Portlander. Food carts, relationships, luck, the balance of work and play, keeping up with technology. Progress isn’t all good or bad. But it’s here and it’s changed us. Now I have anxiety if I leave home without my phone. Having the phone is great. The anxiety isn’t.”The album may have "got a slow start for lots of reasons," according to Kearns, but "we were working on the songs for a long time," with most of the recording done in the first half of 2010. Since then Blue Skies For Black Hearts has created a film and multimedia live show as well as broke wishbones with vonHummer.---
Read the rest on OMN.
Posted by pdxnoise at 09:18