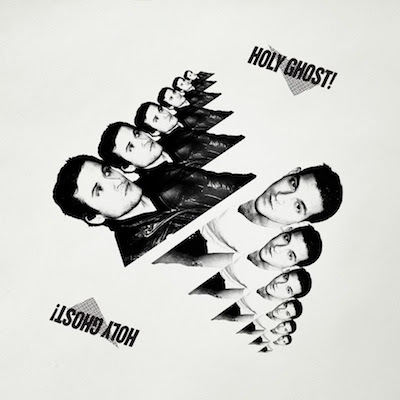 Releasing their debut album on Tuesday, Brooklyn's Holy Ghost! took the #1 spot on the iTunes Electronic charts with the duo of Alex Frankel and Nicholas Millhiser proclaiming they feel "amazing!"Amazing relief and excitement that their self-titled, first album is finally out, via the famous NYC dance label DFA Records, available to the world after years of touring as DJs and, more recently, high-profile opening slots for some of dance's biggest names. OMN spoke with the guys back May 2010 before they ever hit Portland stages opening for both LCD Soundsystem and Chromeo on consecutive tours that swept through PDX and across the nation.

With cred like that, it's not surprise they went straight to #1. Plus the music ain't bad either.

Holy Ghost! makes synthesized, electronic-based pop music--extended dance cuts mixed with the songwriting and pop sensibilities of their DFA mentors: James Murphy (LCD Soundsystem) and Tim Goldsworthy. Although it's plenty radio-friendly, Holy Ghost!'s bread and butter is the complexly intensifying dance groove that takes six minutes to develop, thus resurrecting a modern-day disco and tropical club jams on dance floors across the world, much like their experienced Aussie counterparts Cut Copy, for whom they are currently opening (except in Portland sadly).

Instead, they'll play Portland as part of the Soul'd Out Music Festival on Wednesday, April 13th at Branx with Portland's Reporter and the ridiculous hip-hop purveyors Das Racist--a Brooklyn trio of color where the "Das" is not a German article but rather a slurred "That's" and who aim to combate racism by casting the first stone, by being racist themselves.

Das Racist is hype man Ashok Kondabolu (aka Dap) and rapper Himanshu Suri (aka Heems), who both grew up in Queens, NY to Indian-born parents, and rapper Victor Vazquez (aka Kool A.D.), from San Francisco and of Afro-Cuban and Italian heritage. With beats that pull from 8-bit video games and have the same minimal complexity as The Cool Kids' Chuck Inglish, Das Racist spouts the "brown skin" political agenda of Dead Prez or Public Enemy but with a but with a novelty, MC Paul Barman twist. Rappers that are also jokesters can be a difficult act to stomach (as the quality of the music often suffers for the sake of comedy), but Das Racist has managed to outlive their internet buzz, even with their questionable initial (s)hit "Combination Pizza Hut and Taco Bell."