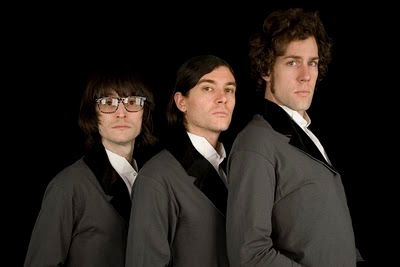 What are three art school, almost 30-something white boys doing making funky, sexalicious music? Not asking for your permission, Strength is telling you, “Let’s get down” with the release of their second–long, long, long-awaited–album, Mind-Reader. The self-produced, recorded and released album comes out on September 3rd, coinciding with a CD release gig at Holocene with Fake Drugs, DJ Copy, and DJ Patricia Furpurse.

Feeling up MJ and Prince for their goodies, the California-natives but PDX-transplants since ‘03 set out to make a horror-dance album but got distracted along the way by their normal shenanigans of sexy electro-funk-soul. And why shouldn’t they get diverted? …While diverting themselves with their tongue-in-cheekiness. Ridiculous lyrics, indelible riffs and thumping beats make you wanna get up and freak your girl while trying to lay her down.

Looking to make a “darker” sophomore album, Bailey Winters (vox), John Zeigler (keys, programming), and Patrick Morris (guitars, programming) didn’t get distracted with the production, it consumed them–every sound is delicately and deliberately placed. This is why it took them so damn long–four years long–for the release of album #2. But being seriously scrupulous doesn’t mean they can’t have fun, including a vampire track (“Blood” with lyrics “My body’s weak, I’m out of time, I need her blood before sunrise”) and a bit of punk rock, albeit still quite smoothly produced punkiness, on the energetic “Disaster.”

“I thought it would be great to just have a punk song, one of our own,” says lead singer Bailey Winters. “And it goes over pretty well. I think it shakes things up a little bit.”

---
Read the rest of the interview and download a new track on OMN.
Posted by pdxnoise at 00:06