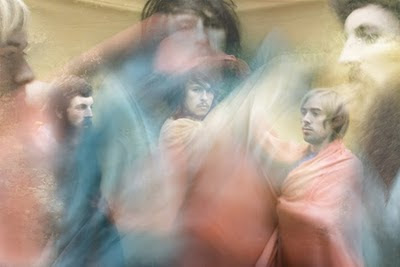 Known for their transience in music and mind, body and band, Nurses have been dawdling around Portland, just maybe coming to a halt, calling our city home. With their trippy pop and backwards rock, the trio’s quirky sounds are layered dreams that feel like you’re listening to multiple songs at once. Seeping through the sieve of their textures emerges a rusty but sunny sound that’s dysfunctionally charming and gorgeously psychedelic.

Wanderers at heart, this journey began in Idaho Falls, Idaho as Aaron Chapman met John Bowers over a decade ago.

“Yeah, we met in the 19 hundred 99’s,” says Aaron. “We had some mutual friends who played music, and we all got together one day to play music in a basement, and we accidentally kept playing music ever since. We probably played a song before we had a conversation.”

Since then they have been through “two major” incarnations, says John. Originally a quartet, the boys moved from Idaho to SoCal where they self-recorded and released their debut, Hangin’ Nothin’ But Our Hands Down, in 2007.

Come 2007 John and Aaron moved to Portland after stints in Chicago and four or five months living in their van. “We moved to Portland on a whim and everything just made sense,” says Aaron. “We didn’t even know Portland had such a great music and art community, we just thought it sounded like a fun idea. Personally and musically it’s been great for us.”

They soon met James Mitchell, and “James joined the band basically right as we moved to Portland. He let us sleep on his couches for weeks because we didn’t have a place,” says John. “When we were offered a show, we asked James if he knew anyone who played drums, and he said something like, “Did you guys know I play drums?”

Joining Dead Oceans, the three-piece released their sophomore album, Apple’s Acre, in May of 2009. Always busy with something, the boys have been surprisingly inactive (or off the radar) all summer, but they’ll play their only Portland gig this Thursday, August 26th at Holocene with “oily” friends Dragging an Ox Though Water and Operative before stomping around Western Europe in September.

“We’re touring quite a bit now which satisfies the wanderlust,” says Aaron, “and Portland is a great place to come home to.”