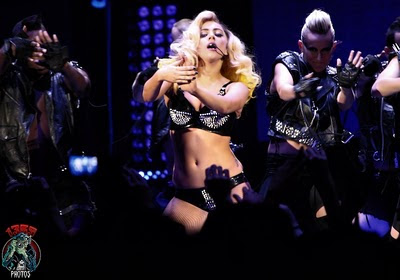 With tens of millions of album sales worldwide, hundreds of millions of YouTube views, and tickets starting at $49.50 (sans service charge) and sweeping up to a whopping $175 for last night’s sold-out-in-minutes Gaga extravaganza at the Rose Garden, Stefani Germanotta is raking in the dough. Billboard Magazine estimates that The Monster Ball Tour will gross some $200 million worldwide when it finishes next year.

But don’t think she’s not gracious. Or generous.

Especially when she announces, “I don’t want your money Portland, I want your soul.”

When Lady Gaga addressed the crowd, she spoke in just two distinct tones: a calm, sultry, quiet chatter and a deranged, at times unintelligible, scream. Placidly, even apathetically, Gaga repeatedly thanked Portland: “Thank you. Thank you for buying a ticket to see my show,” followed by the feral, self-indulgent screech of: “Lady GAGA!!!”

Before she took the stage, her prerecorded voice inspired the first massive waves of incessant screaming as she tackled a serious issue: helping homeless youth, especially those that have been forced from their homes by parents because they are gay, lesbian or transgender. Along with tour sponsor Virgin Mobile, the two have established a charity and Lady Gaga reiterated (twice) that for every dollar you donate, she will match it… up to $25,000. (You can watch a video of the speech here.)

She does care. Right?

Costumes and hair art galore, the fans were giddy with Gaga riding the MAX and filling the beer gardens before her set. Many midriffs were bared entering the arena, and there was a man in makeup and a miniskirt with his well-maintained mustache. Although there were groups of all ages (including grade schoolers) and orientations, a large swath of the audience was made up of teenage girls (and their mothers) and 20-something gay men.

So what other messages of Gaga wisdom did she have to impart upon us adoring fans?