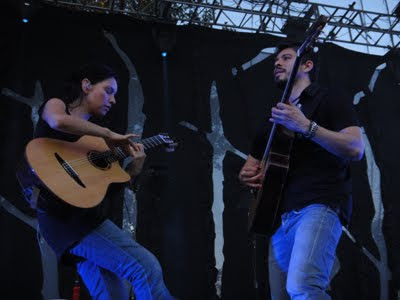 And a dedicated following is always present to see both whenever the duo comes to town.

Entering silent and subdued, their hands spoke. Attentively watching one another, the duo quickly found their rhythm and shared it with the crowd, rising and pacing the stage, stopping at either end, then standing side by side. Squaring off, Rodrigo y Gabriela do not duel–they each present a piece of the puzzle and the other builds off the provided energy and flair. Both guitar necks angled skyward, their hands hurtled forward on divergent courses. With speed and dexterity, Gabriela’s rhythms scatted and knocked, slapped and clapped the body of the guitar running at a breathless pace while Rodrigo’s lead could whisper and roar.

Seeing is believing: There really were only four hands on stage although you likely heard many more.