intoxicating : chromeo funks up the roseland 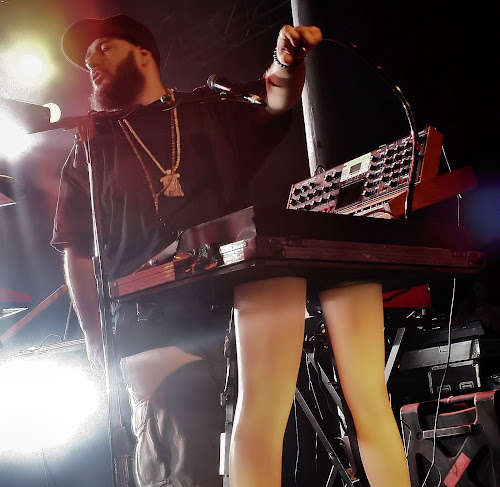 Chromeo is breaching new waters of popularity. With a new album, Business Casual, on the way in September and rave reviews from high-profile festivals, like Bonnaroo where they shared the stage with Daryl Hall, the Québécois electrofunk duo has officially sailed from hipster island into markedly bro-friendly waters.

Maybe it’s the fact that the tour was brought to us by Mountain Dew (and their record label Green Label Sound) or the simple irresistibility of Chromeo’s MJ vs. Prince-inspired beats, but their brand of dance is currently attracting malnourished hipsters as easily as beefy frat boys–bridging the gap between a cross-section of culture that usually sticks to their own locales: The former with their DJs and sweaty mess of Tube and later across the street at Dirty.

Yet, last night, a sold-out Roseland Theater on Friday the 13th told a different story. Amongst bro hugs and nasty grinding, there were also skinny jeaned boys and girls getting down to the same indelible guitar riffs, programmed beats, and robo talkbox.

Not just getting down, Portland was in heat last night for Chromeo: immensely uninhibited and drunk, drunk, drunk. Bikini tops galore, in neon, gold and leopard print, ran around the dance floor as bros booty slapped (each other and females), trying to garner attention from the bikinis and secure a dance partner for the funky, freaky last set.

Some snarky hipsters will be disappointed in Chromeo’s new-found demographic but you can’t knock a band for continuing to do exactly what they were created to do. And that went a little something like this:

As the lights went down and the crowd chanted “Chro-me-o, OOO,” a red neon Chromeo logo glowed on high as Dave 1 and P-Thugg entered to the same “Intro” track from their second album, Fancy Footwork. Blinding strobes pulsed, and a wall of white lights silhouetted the two standing behind their flashing, color-changing light up legs (which were hardly visible unless you were in the very front).

Focusing on hits from Fancy Footwork, a few girls bounced on shoulders as the goofy funk of “Outta Sight” sounded even sillier live. But it served to lubricate the crowd with exactly what they wanted as Dave 1 and P-Thugg tossed vocals back and forth and each grabbed sticks for quick drum breakdowns and cowbell clacks into an all-audience sing along on “Tenderoni.”