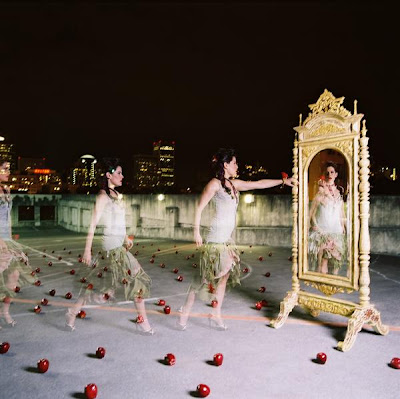 Reinventing your sound is exciting, scary, adventurous, and a sign of a spectacular artist... that is as long as it works. And yes, it did for Miss Stephanie Schneiderman.

Artists that evolve, break their personal mold and creative boundaries, that explore--those are the elite musicians. Reinventing your sound is "risky business," according to Stephanie Schneiderman, but the risk factor is decimated when you have producer, beat-extraordinaire Keith Schreiner (Auditory Sculpture) on your team.

And Stephanie's kept her songwriting and voice, which smoothly float over Keith's soothing trip-hop ambiance. It's sexy. It's relaxed. It's lovely.

The two bring their down-tempo, electro-beats and sensual vocal bliss along with James Beaton (Storm and the Balls) on keys to Jimmy Mak's on Saturday, January 23rd with Come Gather Around Us at 8 PM for $10.

And this girl is setting up and knocking down cocktail hours at Jimmy Mak's every first and third Thursdays starting in February through April. These shows will feature the keyboardist/singer Jade Vanacore, and Stephanie says, "I've been working on a more stripped down version of the trip-hop show involving beats, loops, keys, electric guitar and harmonies so this residency will give me a chance to get really comfortable with all my new toys. Also, I'm going to try out a bunch of new songs!"

---
Read this article on The Deli Portland.
Posted by pdxnoise at 05:12