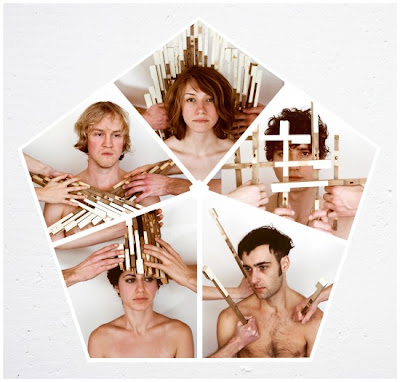 Fresh off of their first appearance at SXSW, Portland's Radiation City have been working their way back home up the West Coast since departing the anointed indie fest in mid-March. Down in Austin, Rad City played seven shows in four days, including The Portland Party (which we threw for ourselves, damn it!), and, although they just released their debut LP in September, they've been playing plenty of new material from their new EP, Cool Nightmare, which will be released on April 10th via Tender Loving Empire.

The full-length, The Hands That Take You, was largely the efforts of Rad City creators and couple Cameron Spies and Lizzy Ellison, but the latest seven-track EP sees contributions from three additional members: Matt Rafferty, Randy Bemrose, and the newest addition, Patti King.

With Cool Nightmare, there's an intriguing story of finding inspiration in a decrepit piano before destroying it, documenting the whole process audibly and visually, and sharing some mementos of this exercise with fans.

To understand the ideas and muse behind this eerily bewitching EP, which is also full of "dream-like ambience and warmth," OMN spoke to Cameron Spies before the band returns to the NW in the beginning of April for two Oregon shows: Sunday, April 1st at Sam Bonds in Eugene and a free EP release party at Rontoms in Portland on Sunday, April 8th with Seattle's Legendary Oaks.

But first, listen to the spectral power of the latest single "Eye of Yours":

Two months ago, you released a music video for "Find it of Use" (below), which featured the destruction of a piano. Tell me the story behind your new EP and that piano's role.

The imagery for this record involves this piano that lived in Randy's basement. We recorded a lot of the piano tracks for the album [using this piano], and by the completion of the record, the piano was essentially useless—a ragged heap wasting away in the dark. We decided it would be best to give it new life through its destruction. We captured audio of a decent amount of the moving/smashing part of the process for use as samples on the record or for use in later recordings (hence the title "Find it of Use," I guess, although the song title came first). That imagery is not an accident though. The record evokes the idea of destruction and rebirth through a gentle tug of war between darkness and levity.