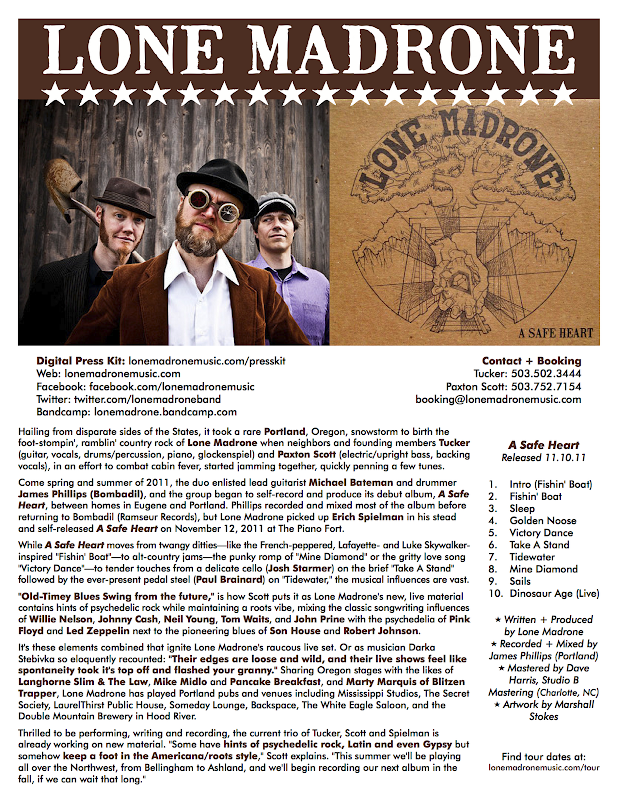 I recently designed the above one sheet and wrote the following bio for the Portland-based country rockers Lone Madrone. Listen to their debut album A Safe Heart:

Come spring and summer of 2011, the duo enlisted lead guitarist Michael Bateman and drummer James Phillips (Bombadil), and the group began to self-record and produce its debut album, A Safe Heart, between homes in Eugene and Portland. Phillips recorded and mixed most of the album before returning to Bombadil (Ramseur Records), but Lone Madrone picked up Erich Spielman in his stead and self-released A Safe Heart on November 12th, 2011 at The Piano Fort.

Out of that first long winter came the standout track "Sleep" inspired by "the desperate need for spring after a particularly long winter." The tale begins cold, with slushy, odd-metered blues that represent the grind winter can cause, but the quick, upbeat swing transition about a minute in reminds you that spring is inevitable, while the final section ushers in the long-awaited return of warmth and light with the lyric "Go back to sleep, I’ll be with you tonight."

While A Safe Heart moves from twangy ditties—like the French-peppered, Lafayette- and Luke Skywalker-inspired "Fishin' Boat"—to alt-country jams—the punky romp of "Mine Diamond" or the gritty love song "Victory Dance"—to tender touches from a delicate cello (Josh Starmer) on the brief "Take A Stand" followed by the ever-present pedal steel (Paul Brainard) on "Tidewater," the musical influences are vast.

Although plenty of youthful teeth were cut in punk rock and cover bands, it's Scott's time in Louisiana with Delta blues, Cajun and zydeco music and Tucker's percussionary travels to lands like Brazil—where he studied samba percussion—and Turkey plus matured interests in old jazz and swing that add depth to Lone Madrone's sound.

"Old-Timey Blues Swing from the future," is how Scott puts it as Lone Madrone's new, live material contains hints of psychedelic rock while maintaining a roots vibe, mixing the classic songwriting influences of Willie Nelson, Johnny Cash, Neil Young, Tom Waits, and John Prine with the psychedelia of Pink Floyd and Led Zeppelin next to the pioneering blues of Son House and Robert Johnson.

It's these elements combined that ignite Lone Madrone's raucous live set. Or as musician Darka Stebivka so eloquently recounted: "Their edges are loose and wild, and their live shows feel like spontaneity took it's top off and flashed your granny." Sharing Oregon stages with the likes of Langhorne Slim & The Law, Mike Midlo and Pancake Breakfast, and Marty Marquis of Blitzen Trapper, Lone Madrone has played Portland pubs and venues including Mississippi Studios, The Secret Society, LaurelThirst Public House, Someday Lounge, Backspace, The White Eagle Saloon, and the Double Mountain Brewery in Hood River.

Thrilled to be performing, writing and recording, the current trio of Tucker, Scott and Spielman is already working on new material. "Some have hints of psychedelic rock, Latin and even Gypsy but somehow keep a foot in the Americana/roots style," Scott explains. "This summer we'll be playing all over the Northwest, from Bellingham to Ashland, and we'll begin recording our next album in the fall, if we can wait that long."

Email ThisBlogThis!Share to TwitterShare to FacebookShare to Pinterest
Labels: lone madrone, one sheet