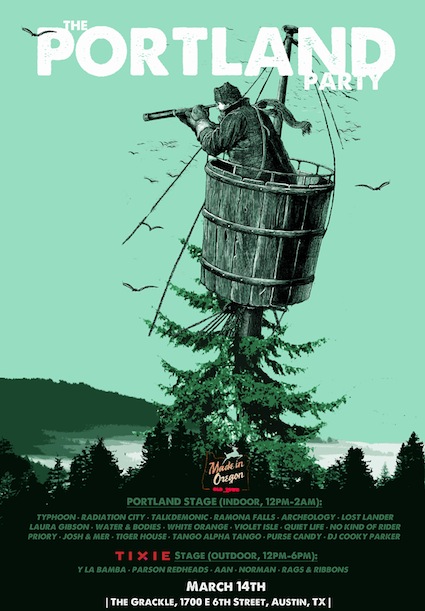 Besides the Oregon-oriented Ninkasi Northwest Local Outpost Presented by In Music We Trust, plenty of other Oregonians and PDXers will be headed (or are already on their way) to Austin for this year's SXSW. As OMN's Stephanie Salvey recently wrote:

Portland and Austin share many things in common, such a wicked, healthy and nurturing independent music scene. Parts of each town even resemble the other. South Austin feels like inner-eastside Portland as it is the Texas capitol’s bohemian part of town with all its taquerias, art shops, funky, yummy cafes, and fabulous dive bars—many of which blossom into make-shift concert venues each March.

This March 13th through 18th Oregonians, by birth and naturalization as well as those who have moved onto to sunnier cities, will take the dive bar, music biz party, and official showcase stages of Austin. Here are a few notables that have come through the OMN inboxes (and a zillion more that we're not intentionally omitting!).

PDX via New Zealand's Unknown Mortal Orchestra will bring some fuzzed-out delight to many stages including the Force Field PR and Terrorbird Media day party on March 14th (RSVP here)—playing before UMO will be PDX's AU (don't get them confused)—as well as headlining an official SXSW showcase that same night. You'll be sure to hear "Strangers Are Strange," which has a new vid that we're absolutely loving:

As Portland brings our own showcase to Austin from 12pm to 2am on Wednesday, there will be two stages—the Portland Stage from 12pm-2am (indoors, 21+) and the Tixie Stage from 12pm-6pm (outdoors, all ages).

Plus free beer, free coffee, and free vodka. Mixed. Together. Just ask for a Bridgetown Nip.

---
Get the complete Portland Party lineup and more on PDX acts at SXSW on OMN.