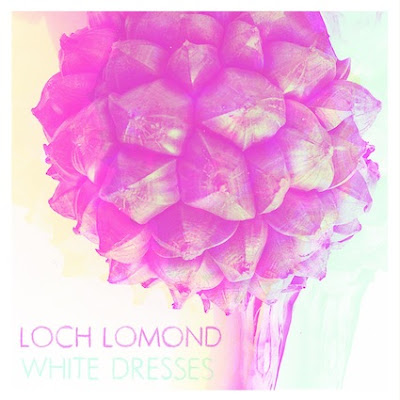 There wasn't much fanfare surrounding Loch Lomond's latest EP release on March 5th—at least not around these parts. And maybe that's because it wasn't intended for us.

In fact, the five-track EP White Dresses was recorded specifically for their latest European tour, which wrapped up on March 10th, and released only on their European imprint, the Glasgow, Scotland-based Chemikal Underground.

Just over a year after releasing their second album, Little Me Will Start A Storm on Tender Loving Empire, it's not been uncommon for the band to frenziedly record a single or an entire EP during the time in between full-length LPs. Two thousand nine's EP Night Bats was pulled together in six days, two years after the debut, Paper The Walls, but two years before Little Me, and as lead singer and songwriter Ritchie Young put it, the EP was done "kind of to prove to ourselves that we could do something fast and good."

The story behind White Dresses is similar.

"Our last record, Little Me Will Start A Storm, took two years to complete," Young says. "Chemikal Underground asked us to give them an acoustic EP just for this tour. We found ourselves recording essentially one-third of the new record in 16 days. It felt so wonderful to be able to complete this without second-guessing ourselves and just going for it."

The typical elements are here with Young's distinctive, emotive vocals guiding the delicate but robust chamber-pop symphony of familiar but curious and childlike sounds, provided by bells and glockenspiel touches. There's history and drama in the violin and support from the chorus of backing harmonies, which add another, weaving layer to exquisite hush.

Young explains that this EP is essentially a piece, or preview, of their upcoming record.

"We are going back to the wonderful people that helped us record and mix White Dresses to flesh the current songs out and finish the record for release in the US."

That includes Tony Lash (Elliott Smith/The Dandy Warhols), Kevin Robinson (Viva Voce) and Douglas Jenkins (The Portland Cello Project), who Young says "are amazingly talented people and I am very excited to see how the rest of the record will play out."

As for White Dresses, there's a fleeting moment on the opening track "Inventing You" that feels like The Decemberists but the following song, "Kicking With Your Feet" (below), is all Young's, full of wispy androgyny in the vocals, which are calming and piercing, often at the same time.

The title track is spiritual and the closer "Your Eyes" has all the qualities of a future LL single, which it's surely guaranteed to be.

Back in the NW, the lineup of Ritchie Young (vocals, guitar, violin) and his brother Michael Young (drums) as well as Jade "Brings Plenty" Eckler (vocals, glock), Jason Leonard (guitar, bells), Brooke Parrott (vocals, keyboard), and Dave Depper (vocals, bass) will visit Boise (for the Treefort Music Fest) and Seattle before two Oregon homecoming shows in Cottage Grove at the Axe & Fiddle with Brooklyn's Dinosaur Feathers on Saturday, March 24th and in Portland at Mississippi Studios on Sunday, March 25th with Dinosaur Feathers and Seattle's Lemolo.

These shows are your only chances to get your American mitts on a physical copy of White Dresses as Young tells, "We brought over 100 copies just to sell at these four shows."