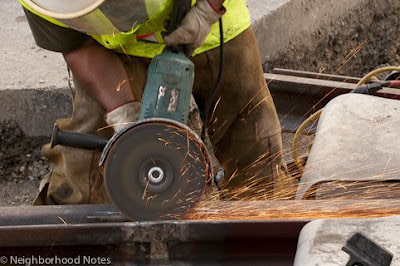 Who is responsible for job creation? The president, local government, entrepreneurial business people?

As we expressed last month in the first installment in our Thinking Local series, you don’t have to look to ambiguous entities to create change in your community. You, and your neighbors, have the power to effect considerable change by just changing your habits. There is power in your dollar, but there is also power in your voice and vote.

So, what exactly is job creation? Any new job that pays a living wage in Portland is a good thing, right?

Well, yes. And no, because it’s not that simple. Where did that job come from? If it was homegrown, that’s great. But, sometimes job creation in Portland is a job loss in another part of the country. And does wooing a big business to relocate in your city really benefit the locals?

In 2002, the City of Portland encouraged the Denmark-based wind turbine manufacturer Vestas to relocate its North American headquarters and build a new manufacturing plant in town. Announcing it would bring 1,200 jobs to Portland (at a time when we had the nation’s highest unemployment), Vestas received encouragement in the form of public incentives—more than $10 million in public funds.

After pitting the Port of Portland’s Rivergate Industrial District against Washington’s Port of Longview, the manufacturing facility never came to fruition and the jobs eventually went to Colorado. Other planned expansions stalled, like the $250 million South Waterfront headquarters, for which the company was set to receive $31.5 million in direct incentives from the state and city in 2008. The $12.5 million from the city was the most Portland had ever offered for corporate recruitment, but the company said it would create 850 new white-collar jobs by 2011.

And it worked. Sort of. Vestas did come to town (and has ultimately stuck around) but not all the jobs followed. The Danish company currently employs approximately 400 in Portland, leaving Vestas some 800 jobs short of the goal it set in 2002 and again 2008. After ditching the expensive South Waterfront project, Vestas finally committed in 2010 to a $66 million renovation of the Meier & Frank Depot Building in the Pearl. City Hall offered Vestas another loan ($8.1 million this time with no payments due for 15 years), of which The Oregonian said, “Portland’s urban renewal agency sidestepped its own guidelines last week in approving an unprecedented interest-free loan to keep turbine-maker Vestas in the city.”

Now, in 2012, the latest news is that Vestas lost $220 million in 2011 and was forced to cut thousands jobs worldwide. Vestas will not disclose the total number of employees affected by location, but company spokesperson Andrew Longeteig says, “The jobs lost in Portland were limited to a few positions.”

When these incentives were given out, it was assumed the income taxes of new hires would repay state's incentives in five years or less. Obviously, the anticipated expansion never happened, and local local taxpayers have been burdened with the cost.

It’s difficult to determine the public cost per job created, but if we focus on the most recent, and smallest, $8.1 million loan, The Oregonian reported that it could cost taxpayers as much as $2.6 million to cover interest payments. And, the city is only compensated for that $2.6 million (over five-plus years) if Vestas actually grows and adds 800 jobs—in the meantime, taxpayers shoulder the liability.