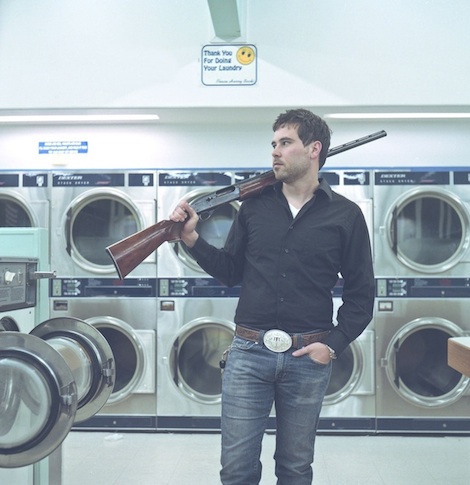 A revolving collective led by Ed Thanhouser, Ed & The Red Reds' 10-track Lost Leader dropped on January 23rd but the celebration happens on Friday the 27th when "my big-ass band of 10 people takes the stage to play the whole album start to finish," Thanhouser says.

Ed and Co. will be headlining Sellwood's The Piano Fort (read OMN's recent article on the venue) for the release of their debut CD with Meridian, W.C. Beck & The Valiant Swains, and Ezza Rose.

Full of road weary tales, and a little bit of rambling, supported by the delicate vocals of Jade Eckler (Loch Lomond), Jenny Wayne (John Heart Jackie) and Ezza Rose, Lost Leader has twang on "Albatross," a not-so-subtle-rage on "Black Fitted Shirt," a bit-o-blues on "Doubt" (thanks to Paul Christiansen's organ work), and it's all propelled by Thanhouser's honest songwriting--"Would love me, when I'm ugly, when I'm old, and I'm pudgy, it's alright, you don't have to lie to me," Thanhouser bellows on "Albatross" (below)--and strong yet inviting vocals.

The sparse moments of Lost Leader give way to wicked guitar solos (again on "Albatross," provided by Hoyt Emerson) and feedback battling harmonicas at the end of album opener, "Story of the Sound." Thanhouser's definitely a countrified boy wrapped up in an indescribable Portland indie rock scene. (See the above photo for proof.) Part of a burgeoning alt-country, folk-country, singer/songwriter umbrella, it doesn't matter much what you call it just "don't you dare call it 'Americana' goddamnit," Thanhouser threatens.

"Trying to get it close to the sound on the record" (which was recorded at Type Foundry by Adam Selzer) and playing it in its entirety, Thanhouser will bring Lost Leader to the stage with Jennie Wayne, Jade Eckler, and Ezza Rose providing vocals, Reed Wallsmith (Blue Cranes) playing sax, Kenny Feinstein (Water Tower Bucket Boys) on mandolin, Hoyt Emerson on guitar, Sophie Vitells on fiddle, Zach Stamler on bass, Ryan McPhail on drums, and Jason Montgomery (Jackrabbit, The Low Bones) playing "everything from baritone guitar to pedal steel to plain old Tele. Yeah, that's a lot of people... we could almost be a soul band!"