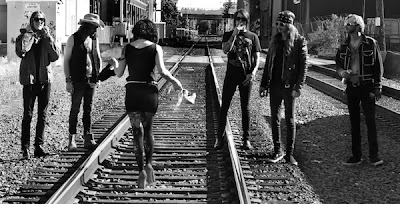 So much comes through my gd inbox every, single day that it's extremely difficult to stay afloat. I'm constantly skimming, always forwarding, and rarely revisiting. Often the squeaky wheel gets the oil and I spend the bulk of my time responding to inquiries and requests from the people I personally know.

Everything else of interest, especially that which is local, gets a little Gmail label stuck on it. And then it gets pushed into email oblivion. Once it has left that first page of 50, or even fallen beneath the fold with 30+ emails sitting above, it may be lost, even if it's gone unread because I knew I was interested in it... ever so slowly it slips into the digital quicksand, briefly resurfacing if it's lucky enough to be searchable (or unlucky depending how searchable it is), begging to escape the inbox purgatory, pleading for hell: permanent deletion.

It takes a very special set of, completely subjective, oft uncontrollable, circumstances to escape this fate.

Already cognizant of the psych, trance rock of White Orange, a less serious, stoner rock (see here) alter ego is not out of the question... I just wish someone would've slapped me in the face with it!

Instead, I breezed through the email.

But thankfully, OMN's Ruben Mosqueda quickly offered to do a write up on the band's debut, six-track album, On Blonde, due out on January 17th.

"That takes care of that," I thought. And it may have been another long while before, or if, I ever revisited Black Pussy.

If only I'd slogged through the initial emails/bios I would've realized that Black Pussy is the "baby" of White Orange vocalist/guitarist/songwriter Dustin Hill and features WO guitarist Ryan McIntire, bassist Adam Pike and drummer Dean Carroll plus backing vocalist Madeline Mahrie and guitarist Peter Meissner, who also provided the album's artwork. 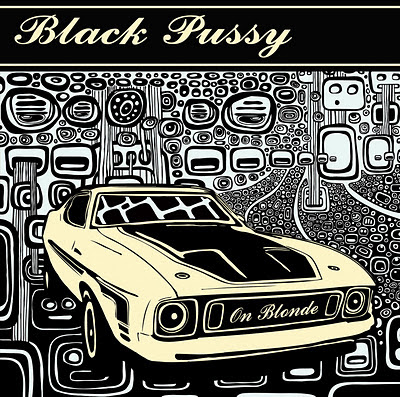 And I would've read this descriptive gem: "The Rolling Stones song 'Brown Sugar,'" Hills says. "We heard a rumor that they wanted to call it 'Black Pussy' but for some reason or another they had to bring it down."

So, how did Black Pussy finally capture my attention? Another press email, a few more forwards, some banter back and forth, and it hit me that this was the band that my buddy Sabotage Jones said he saw on NYE in White Orange's stead at Kelly's Olympian. Stoner rock, copious consumption, make outs, nudity on stage. Here are the photos to prove it.

It takes a couple of days for these things to settle in.

So, back I go to read Ruben's yet-to-be-published review where he says, "Portland's Black Pussy is a sludgy throw-back that harkens to a time when lava lamps and black lights reigned supreme. Their debut On Blonde is full of rebellious attitude, obnoxious, distorted guitars, and memorable hooks."

Not to mention: "The lyrical content touches on everything that you’d expect--sex, drugs, more sex, and rock ‘n’ roll--and comes as no surprise from a band that lists their inspirations as weed, wine and women, not necessarily in that order."

Couldn't of said it better myself. Here's to bong rips, "high-heeled cocaine" and Black Pussy.

Welcome. I will be delighted to celebrate the release of On Blonde at the Ash Street Saloon on Saturday, February 11th.