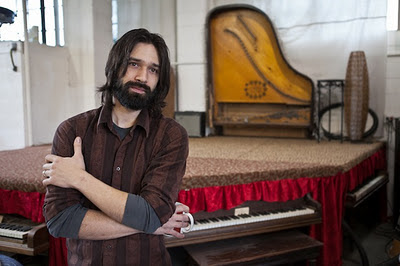 As Portlanders were faced with the demise of one Sellwood clubhouse, another is destined to rise, nearby, from its ashes. And again, much of the appeal of this new venue is the uniqueness of the establishment: Modcott Pianos by day and The Piano Fort by night.

Enter Modcott during business hours and you'll be greeted by the full-bearded, easygoing, polite owner Sam Evans and his feisty, beige-and-white, miniature Italian greyhound Stella, who'll not doubt excitedly paw at your calves and thighs.

Discarded piano parts line the walls, providing decoration for the spacious warehouse located a block from the intersection of Milwaukie and 17th on Spokane St., and the chalk, A-frame sign out front reads: "Piano Repair, Transport, Tuning, Rebuilding, Art & Music."

It's that last bit we'd like to focus on. While piano restoration is most definitely an art, and a craft Evans has been perfecting for 16 years, The Piano Fort is a fairly recent development in the history of the one-year-old shop. Modcott, an abbreviated take on the name modern cottage, referring to the original upright, cottage-style piano, threw its first show on June 18th and has been averaging about one per month since then, with six or seven shows now in the books.

Friend and multi-instrumentalist for Blitzen Trapper, Marty Marquis, first suggested that Evans host a show. The thought had crossed the piano tinker's mind before and his consent resulted in a successful benefit concert featuring Lone Madrone, Seth Kenzie, and Marquis.

But the inaugural performance at The Piano Fort would not simply be performed in the corner or even on top of a makeshift stage. No, the structural integrity of the stage would be founded upon the sturdy cases of grands themselves.

"Grands are actually supporting the music," Evans grins as he steps from stair to piano bench to keys--producing a discordant mash of notes--before taking the stage built on top of pianos. With five pianos (four grands and a spinet) bearing the load, Evans ensures that the strength of the cases leaves the solid instruments unharmed, except for the spinet used as a stair, which he assures is garbage anyways. Proving his point, he demonstrates that two of the supporting pianos are perfectly functional, allowing audience members to include themselves in the action if so moved. Another level above the stage sits a drum kit and bands have been known to employ the space for a horn section, keys or wicked guitar solos.

Enter The Piano Fort on the night of a show and you'll encounter an atmosphere that embodies the Portland DIY, house scene. The Fort's policies include a small door charge (often $5 to simply cover expenses), all ages welcome, BYOB if you're 21+, and respect the space--it is a functional workshop replete with tools hanging from pegboards and piano parts hiding in the recesses. 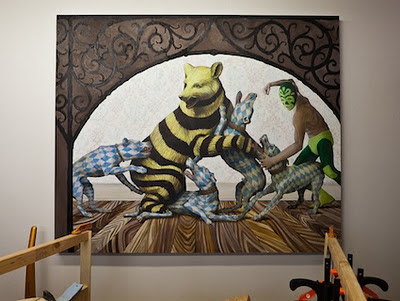