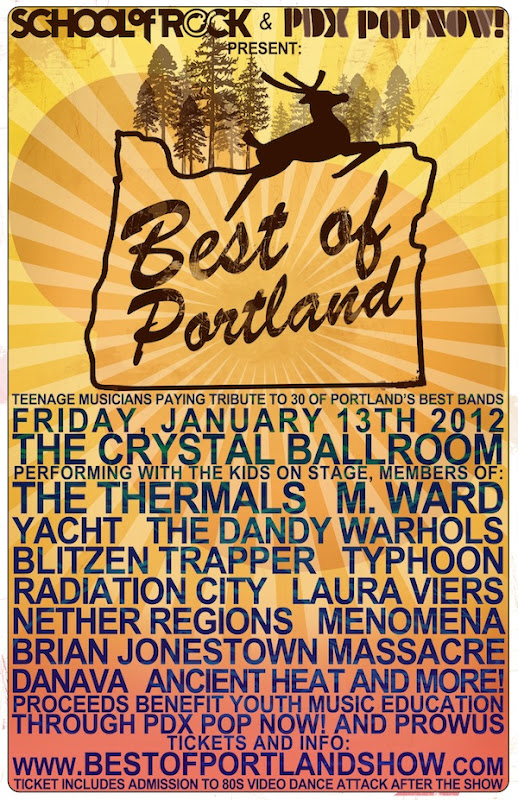 Portland's School of Rock is accustomed to a rock 'n' roll lifestyle.

"This is what School of Rock does year round: teach kids music/songs/entire albums and put on rock and roll shows," says Dani Fish, the assistant manager and an instructor at the Portland School of Rock. "But it’s our first time partnering with PDX Pop Now!," she continues in reference to the upcoming Best of Portland concert at the Crystal Ballroom on Friday, January 13th.

"And it’s about time!" Fish exclaims. "We’re both focused on making music accessible to kids. We’re both teaching kids how to love music. PDX Pop has the local music scene on lock down and does an incredible job of making it open to all ages, and it’s amazing to combine our strengths to put on one great Portland-music-honoring night."

She's talking about the Best of Portland, of course--a night which will feature Portland School of Rock students on stage at the Crystal Ballroom playing music by Portland bands alongside the actual band members. Teenagers rocking out to the local music that they love next to the artists that actually wrote the music. The holidays are over and the "grown ups" will once again mingle with the youngsters... or more likely, the kids will show the adults a thing or two on stage.

"Playing with the kids on stage are members of: The Thermals, M. Ward, Blitzen Trapper, Menomena, YACHT, Radiation City, Typhoon, Danava, The Portland Cello Project, Laura Veirs, Ancient Heat, Mean Jeans, Cower, Brian Jonestown Massacre, Nether Regions, and Zia from Dandy Warhols," Fish lists. "In some cases (like The Thermals), all of the band members are going to be playing with the kids, so it’s going to be epic."

The night will feature two hours of performance from the kids and bands together, "a secret tribute performance," and the normal Friday night affair of '80s Video Dance Attack till close.

Supporting Fish in organizing such an ambitious evening is Ed Thanhouser, the former PDX Pop Now! booking coordinator and current advisory board member who's also been known to lead Ed & The Red Reds--set to release the new album Lost Leader on January 23rd--as well as pen a few articles for OMN.

"I’m grateful Ed and the PDX Pop folks agreed to partner with us," Fish adds. The partnership includes that all of the proceeds from the show will go towards PDX Pop Now!--for their wonderful all-ages, music education advocacy efforts, compilation CDs and summer festival--and PROWUS, which stands for Portland Rock On With Us.

"This nonprofit [PROWUS] was founded by a group of radical School of Rock moms years ago and is now a full-blown nonprofit that serves as a music grant foundation," Fish explains. "Any kid, 18 and younger, can apply for a scholarship to attend any music education program in the city. It’s all about accessibility and fighting the lack of arts education available to folks from varying socio-economic backgrounds."

The rock 'n' roll lifestyle at the PDX SOR will continue long after the Best of Portland performance as current SOR programs include Mötley Crüe vs. Guns N' Roses (destined to battle on Sunday, January 15th at the Mission Theater) and sets dedicated to the albums of Queens of the Stone Age, Pink Floyd, Slayer, Tom Waits, Leonard Cohen, and Nick Cave. See photos of SOR kids playing Rush in June of last year.

With two and a half years under her belt at the SOR, Fish--also a musician, using the moniker Tiny Hearts, who has worked and recorded with Paschal Coeur, Winterhaven, Babies Got Rabies, Vanimal, and Damon Boucher--will be directing the Best of Portland show, an idea she's been aching for "since I started working at School of Rock. I love the creativity in this city and wanted to: 1. Represent [it] 2. Expose more young people to the greatness that’s all around them."

Your goal is "to showcase 25 of the best current Portland bands." How'd you pick the bands?

Dani Fish: This is a show meant to benefit everyone involved. Kids get exposed to great music and get to play their dream gig. Local bands get more visibility. PDX Pop Now! gets money to fund their all-ages music endeavors. School of Rock gets to do what we love to do.

---
Read the rest on OMN and leave a comment for your chance to win a pair of tickets.