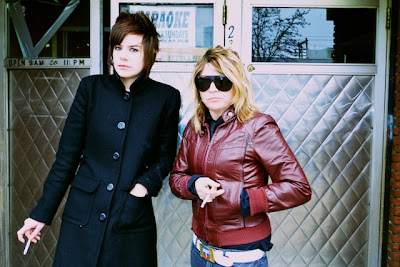 That was the mindset of The Pack A.D.'s Maya Miller and Becky Black as they entered to the studio to record their fourth album, Unpersons, which was released on September 13th, 2011.

The gritty BC duo of Miller on drums and Black on guitar and vocals has always stunned with their potent, feral energy and a raw sense of their own "sloppiness"—a punk ethos their looking to embrace moving forward.

"You don't have to be perfect, which we're not," Miller laughs.

The last time The Pack A.D. played Portland, it was a little-attended affair in the corner of Rontoms on a Sunday night. Before that gig, I described them as:

And while I'm sure they're sick of The Black Keys comparison, they've got a leg up on the Akron duo--not to mention it's still a wise positioning tool as the Carney/Auerbach team is the hottest rock duo since The White Stripes broke up. It took The Black Keys seven albums to ditch their blues, but The Pack A.D. has made their first foray outside of their roots in three albums less.

It's funny. Neither of these bands really cared for the blues in the first place--it was just an easy starting point. The Keys cite the influence of Wu-Tang and hip-hop (as they demonstrated with Blakroc) while Miller admits she's been listening to dubstep lately. Plus, her and Black have oft plotted "a secret side project": "We've been talking for a while about doing an alternate band that would be an electronic band purely," Miller confides.

Don't worry, that won't happened under The Pack A.D. moniker because as the blues get pushed aside in favor of garage punk, the girls still maintain their intentions to only record what can be reproduced live as a duo.

"We don't really have any pretense to elaborate, orchestral pieces or anything like that," Miller explains. "We wanna have as much fun as we would have if we went to a show."

And for both audience members and The Pack A.D. to have fun, expect the music to get "louder and faster" while the lyrics reveal on their geeky pleasures: songs about break ups and monsters, in particular, on Unpersons.

"Sirens" features "an undersea creature" originally inspired by an episode of Angel (more on this later). There's a Frankenstein reference plus robots and ghosts on "Haunt You" (below).

In 2011, "We played the least amount of shows we've playing in three years," says Miller. Well, that's about to change as The Pack A.D. hits the ground running in 2012 starting with a string of four NW dates in January, including the Doug Fir on the 19th, before more dates all over the US in March.

In the weeks following the holidays and leading up to their first dates of the new year, OMN spoke to Maya Miller on the phone from her home in Vancouver, BC. With two and half months of touring already under their belts supporting Unpersons, The Pack A.D. already hit up most of Canada and the Northern US plus recently returned from Europe.

What's been the most memorable tour experience so far supporting this record?

We did Canada and then some US dates and then we went to Europe and did shows in France and Germany and Italy and Switzerland. We played a show in Paris and when we played our song "Sirens" this girl jumped up on stage and grabbed the mic and proceeded to do the chorus parts. We couldn't really stop her because Becky has to keep playing guitar and I can't really leave the drums. To her credit, she actually got it right.