all-ages, electro-dance at superfest333 : a q/a with organizer manny reyes 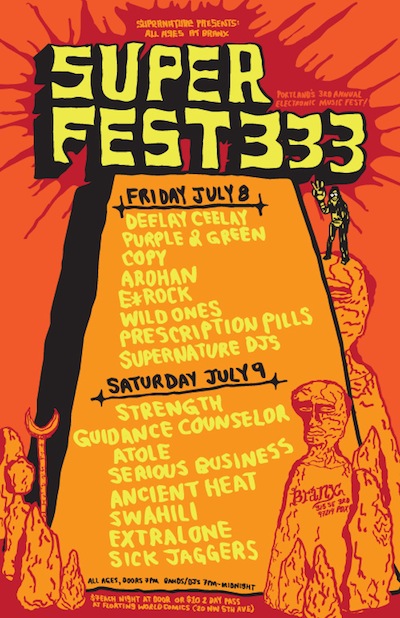 Supernature, Portland’s longtime purveyors of underground electronic dance parties, is back with what’s become the group’s yearly all-ages effort. This summer’s Superfest333, on July 8th and 9th, marks the third consecutive year that organizer Manny Reyes and team have put together an all-ages dance fest, which moves into the notably larger Branx (rather than the upstairs Rotture where it has been held the past two summers alongside the winter edition, Superfresh, which is now in its second year).

Creating an all-ages dance fest was key for Reyes because “tons of kids used to come up to our monthly Supernature [party], especially when our bands Atole or Copy would play because we love and support all-ages shows.” But he continues that, ”Bars and music clubs tend to exist in Portland because of amazing bar sales, so I thought, ‘What if we had a bang out with tons of kids? But we’d make it so our 21+ friends would be interested and come as well.’”

In April 2009, Reyes put together his “dream line up” (which, for the record, was quite the electro-humdinger for PDXers and included performances from YACHT, Starfucker, Explode Into Colors, Nice Nice, Atole, Copy, Panther, Guidance Counselor, E*Rock, Mattress, and more) and approached Conrad Loebl of Rotture (and The Rude Dudes) with the idea.

“To this day he helps with booking and he makes sure paperwork is in so we can have an all-ages show and he schedules a staff of pros that help so much every time,” adds Reyes.

Other important counterparts include Supernature’s DJ E*Rock (Eric Mast also of Audio Dregs), who “always helps with amazing flyers and promo videos,” and DJ Copy (Marius Libman), who “usually DJs or plays in one of his many cool bands.”

Finally, Reyes thanks “Mike, the owner of Rotture, and the entire staff of Rotture, who fully support Superfest and Supernature–without them this kind of party wouldn’t be possible on such a cool, underground level. It’s definitely family vibes, pretty much everyone playing knows each other and are excited to play with each other.”