the black lips mature? a q/a with cole alexander 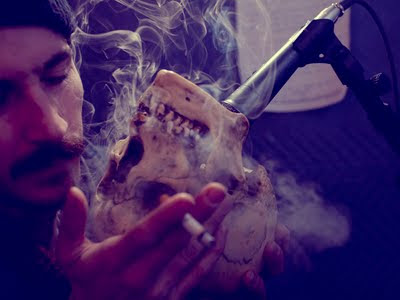 Even if The Black Lips are the last to admit it, they’re maturing. Musically, at least.

“Well, I was 18 for years and now I’m 19 in spirit,” says guitarist/founder Cole Alexander. ”Evolution is slow process.”

With Alexander turning 30 yesterday, the day after The Black Lips released their sixth studio album (on Tuesday, June 7th), Arabia Mountain is the most evolved and refined sound to date from the Lips–16 jolting cuts, 14 of which clock in at under 3 minutes, that range from happy-go-lucky (“Go Out And Get It”) to dark and brooding (“Mr. Driver”) to bizarrely based on a true story (the molestation of Spiderman in “Spidey’s Curse”).

As the band’s spirit remains youthful (read: immature), the music has definitely matured, producing The Black Lips’ most palatable album, something Alexander predicted during production when he told NME: ”I’m hoping it’ll be our most fucked up but successful album.”

And while it’s an album readily available for mainstream consumption, Arabia Mountain is also their best quality work, full of frenetic pop songs and decidedly darker, occult-inspired tracks. For the first time in their decade-plus career, the Atlanta quartet recorded with an outside producer: Mark Ronson, who is better known for his work with soulful English songstresses Amy Winehouse and Adele or heavyweight rappers like Nas, Busta Rhymes, and ODB. What seemed an odd pairing (and although there was one attempt on Ronson’s life) has resulted in a tight album with (as oxymoronic as this sounds) cleaner fuzz that reeks of the energy and durability of The Ramones and The Hives. Lockett Pundt (of Deerhunter) and the band themselves, of course, also had a hand in the production.

A subtle, cleaner departure from the muddy sound of 2009′s 200 Million Thousand, which was recorded by themselves in a warehouse, the band also experimented with adding some sounds–theremin (played by Sean Lennon), saw, saxophone, horns, and a skull. Yes, a human skull. The psychedelia (on and off the record) continues as the band used a human skull as a reverb chamber, an idea they got from ’60s psych-rockers the 13th Floor Elevators, to actually create ”the sound of being inside a human head,” as Alexander told Spinner.

“We’re hoping to tap into the spirit world,” Alexander also told NME. ”We’re hoping the person who once lived in the skull can enhance the songs.”

The previous quote aside, if the album seems a bit calmer and more composed, this will not be reflected in the live setting. The lovably obnoxious offenders are at home on the road and are at it again, touring the world and hitting Portland’s Wonder Ballroom on Tuesday, June 14 with intense East New York punks Cerebral Ballzy (who are set to release their self-titled debut on July 26th via Adult Swim’s Williams Street Records) and Seattle’s Night Beats.

Approaching their thirties, the boys may now be stagebroken but that might not stop them from making out and exposing a butt cheek or more. For a band that’s been kicked out of India because of their stage antics, there will be crowd surfing and spilt (or spit) beer so brace yourself for a wildly offensive and dynamic show–try not to look too shocked at the sight of balls.