celebrating 9 years of andaz with dj anjali + the incredible kid 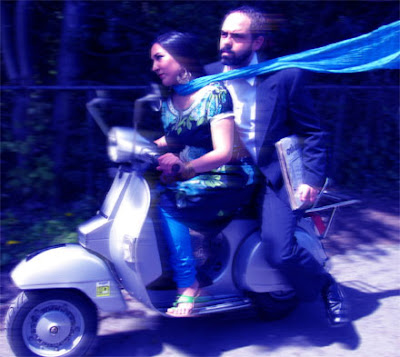 How many DJs are booked to spin Indian weddings, children’s parties, and popular monthly dance parties all in the span of one week? Add a slot at the 2011 Sasquatch Music Festival on top of it all, and it should be clear that most local DJs will never achieve this kind of cross-over success in a career.

The versatile duo of DJ Anjali & The Incredible Kid have done all of the above for more than nine years and they’ll celebrate on July 2nd at Rotture with their original party ANDAZ, which introduced Portland to Indian Bollywood and bhangra music years before it would ever hit the US mainstream from the likes of Jay-Z, MIA or even Slumdog Millionaire.

“Most of it’s awful,” adds The Incredible Kid. ”I think that’s true for most music. It’s been said that ’99% of all music’s crap,’ and that’s really true with south Asian music as much as anything else.”

The ANDAZ party has also remained relevant because it has evolved with the times; the music changes as Indian style permutes. Although The Incredible Kid does concede that they might not be the longest running dance party in town (Goodfoot nights like Soul Stew and DJ Magneto’s First Fridays or DJ Gregarious’ Shut Up and Dance may be pushing 10+ years), they are the longest running contemporary night of music.

A serendipitous appearance at this year’s Sasquatch!–they were booked after meeting fest founder/organizer Adam Zacks at a wedding they were playing–exposed them to thousands of new and younger fans. They duo even played every, single day of the fest–the only artists to do so–and several of their sets were extended. The crowd of thousands ate it up and ”from the stage you couldn’t even really see where it [the people] ended,” gushes Anjali.

As their nine-year anniversary of ANDAZ approaches, watch Anjali and The Incredible Kid talk about how ANDAZ has remained popular over the years and about their overwhelming success as Sasquatch this year.

---
Watch more videos with DJ Anjali & The Incredible Kid on OMN.
Posted by pdxnoise at 10:34