honest, ‘dirty radio’ from sallie ford + the sound outside 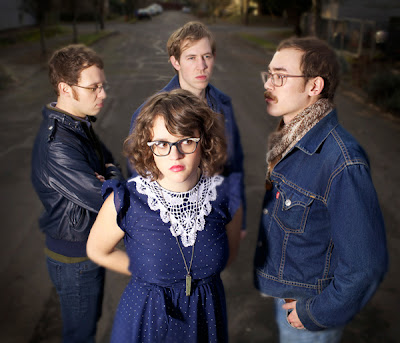 It’s about “always being comfortable” and always “being true to yourself,” says Sallie Ford.

“When I turn on the radio, it all sounds the same. It ah-all sounds the same,” belts Sallie Ford in her distinctive, beguiling bawl on the first track from the band’s debut full-length. With a purposefully placed stutter, her words come in soulful exhalations and end in muffled grunts.

Those lyrics, from “I Swear” (above), and the rest of Dirty Radio epitomize the honesty that can be felt through the music of Sallie Ford & The Sound Outside–a sound that may be utterly foreign to that dirty mainstream radio but is quite familiar here in Portland.

The band of Portland transplants has something honest to say, and after more than a year in the works, the record on which they say it is finally available. Dirty Radio was released via Partisan Records on May 24th and Sallie Ford & The Sound Outside, which features Ford Tennis on drums, Tyler Tornfelt on upright bass and Jeffrey Munger on guitar, will celebrate with two shows at the Doug Fir Lounge on Friday, June 3rd and Saturday, June 4th with handpicked openers sharing the stage.

Yet something about Sallie Ford & The Sound Outside is timeless. It may be their unclassifiability, the gospel and soul divas present in Sallie’s uncommon vocals, or her throwback backing boys who conjure up classic folk, Americana, blues and straight-up rock ‘n’ roll rhythms.

The fluctuations in Sallie’s vocals create an energy, a palpable spontaneity, that comes from her style of songwriting. “The way I write lyrics,” begins Sallie before changing her train of thought. ”I used to sort of write them down but these days I don’t even do that. It’s a rhythmic thing and sometimes they end up forming themselves.”

Sallie Ford & The Sound Outside’s debut album has been a long time coming, but if you’ve been paying attention over the last year, much of it has already been revealed live or reworked from their five-track, 2009 Not An Animal EP.

Gaining subtle crispness in production, the band worked with Mike Coykendall (“We had originally wanted to work with him [on the entire album] but he had a real busy schedule”) and Adam Selzer at Type Foundry Studio. Recording with Mike in February of 2010 and Adam in March of the same year, the band has spent more than a year not just trying to get all the pieces together but putting everything in the right places–not to mention spending the appropriate amount of time simply “feeling overwhelmed with the business side of things,” including shopping the record around and putting together a management team.

Email ThisBlogThis!Share to TwitterShare to FacebookShare to Pinterest
Labels: doug fir, sallie ford, sallie ford and the sound outside