methodically melodic : a q/a with a perfect circle’s billy howerdel 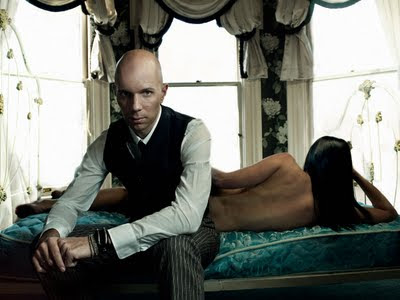 The current bio on A Perfect Circle’s recently updated website doesn’t offer much information. It simply lists that Maynard James Keenan handles the vocals and Billy Howerdel the guitar. That’s it.

With the ease that this malleable group plays, they could almost trick you into believing it’s that simple.

The two may be the original backbone of APC but a rotating cast of world-class musicians has contributed to the larger-than-life band’s instantaneous success since their introduction on Nine Inch Nail’s Fragility v2.0 tour in 2000. Before the release of their debut album, Mer de Noms, the cast of players included Tim Alexander (Primus), Paz Lenchantin (Zwan, The Entrance Band), Troy Van Leeuwen (Queens of the Stone Age, Failure), and Josh Freese (Devo, The Vandals, Weezer), while subsequent releases and line ups have seen appearances from Danny Lohner (Nine Inch Nails) and Jeordie White (Marilyn Manson).

But the APC project has always been Billy Howerdel’s baby; something that the Tool lead singer contributes to when his schedule, between wine making, starring in a documentary about wine making, and also playing in Puscifer, allows. With a wealth of knowledge, experience and professionalism, the mega-group has always followed Howerdel’s vision, something he honed as a guitar tech for bands like Faith No More, The Smashing Pumpkins, Nine Inch Nails, David Bowie, Guns N’ Roses and Tool during the nineties.

A coveted collaboration with Keenan brought wider exposure to Howerdel’s talents, something that was only previously noticed by the musicians he directly worked with, and the two emerged with a potent blend of artistic rock which saw Keenan adding a darkly operatic, dramatic flair to his vocal stylings for APC.

Fall of 2010 saw the band back on the road for the first time since spring of 2004, playing a string of select West Coast dates where APC played three consecutive gigs in each city, performing a different album in its entirety each night. After that warm up, summer 2011 marks the group’s first comprehensive North American tour in almost eight years.

Always a collection of collaborative, talented friends rather than a manufactured supergroup, the quality of the music and performance is a testament to this ethos. OMN had the chance to ask Billy Howerdel about A Perfect Circle’s upcoming tour, which kicks off in Portland, and the band’s future plans for a fourth album. He also gave some insight into his pensive songwriting process and how it feels to work with musicians who influenced him.

I know that technically there is no APC full-length album in the works but how many new songs do you have? And how many can we expect to hear live?

We’ve got one that the music’s there, we’ve been playing it every day, Maynard’s been working on the lyrics and I think he’s really close. We’ll just be cutting it pretty close to play this new song live.

Any plans to record this song?

Yeah, it’s recorded too. We’ll play it live before the recording will come out so that’ll probably be a first for us… well, if you don’t count 1999 before Mer de Noms came out and we weren’t signed and no one knew who we were, we did a few shows around California, but other than that we’ve never tested the waters with a new song live.

I’m just approaching it the same way as recording a body of work that would be an album but it just won’t be released like that. So, I’ll have to finish them in that kind of a way… this one certainly is done first but typically I’ll get everything 85% done and then once the collection of songs is there, then put the final touches on them all so they have some kind of continuity. I just have to be mindful of that ahead of time. It’s going to be a new experience for us.

I’ve also heard that you’re working on new material for a second Ashes Divide album. If the writing efforts for both acts are largely spearheaded by you, how do you determine what is written for what?

I still don’t know. I think the song kind of speaks for itself once it’s written and once it’s underway. Songs are in your control but they’re out of your control; there’s something under our emotional hood that kind of drives where they go. So when you’re writing it and you’re in that process they’re going one direction and you can step away from it for hours to days to weeks and you hear it in a different way because you’re having a different experience in your life. I can look at something and go “this is purposely going to be an Ashes song” and all of a sudden I hear it again and go “this is appropriate for APC and where we’re heading now.” So there’s no great formula, we just kind of go from there.

As far as APC, I’ll present things to Maynard and he’s surprised me with some of the things he’s responded to… which doesn’t surprise me. He’s always looking to evolve and looking for something different. It might surprise you that he’ll do something that’s familiar or older. He’ll keep you guessing which is good; that’s what the collaborative process should be.