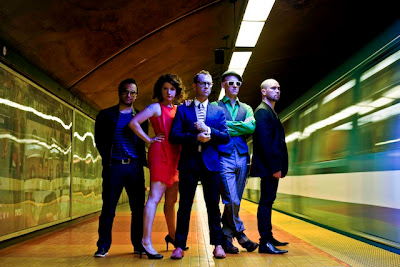 After more than a decade of making passionately intimate indie rock together, Stars' drummer Pat McGee believes the group's familial dynamic has been what's kept the Canadian five-piece collaborative, creative and successful over the years.

"I think that we really act like a family. And that's what keeps us together. Your family can drive you nuts, but you can't get rid of them," McGee laughs.


"They can drive you to the brink of insanity, but you can't shake them," he continues. "They're always going to be there. And I think that's what Stars has kind of become. We're five people who have done this for so long and been through so much ridiculousness together that I think that is where the intimacy comes from."

The band's sixth full-length album, The North, released via ATO Records in September, is laden with an abundance of these innermost lyrical and musical moments, the kind Stars have become lauded for.

From love lost ("Lights Changing Color"), to attempting to save or reignite love ("The 400" and "The Loose Ends Will Make Knots"), and even just cherishing love ("Hold On When You Get Love And Let Go When You Give It"), Stars typical topics are present, but they're reaching a wider audience than ever before as The North earned the group their highest Billboard chart debut to date.


Something familiar to long-time Stars fans are the sporadic audio samples scattered throughout the record.

"It's something that's been happening since the very beginning of Stars," McGee says. "We kind of wanted to get away from it somehow but it doesn't seem to disappear; it just a thematic thing, it was always on our records."

And the samples allow Stars to "create a synthesis of people and places and sounds that reflect things we're thinking of," he says.

With the clanging of locomotive bells in the background, the opening audio sample to The North, from Glenn Gould's 1967 CBC radio documentary "The Idea of The North," reflects "the idea of the future and the idea of the north. The idea was sort of about hope and a mythical idea of what the north was and what it could be. I think now, we've lost a lot of that and I think that's what this record is about a little bit… we've lost this sort of hope, a sort of fantastical and mythical, beautiful idea of what a utopia the north could be. Now we just talk about pipelines and ice caps melting and shit, and it's kind of depressing. It's not as philosophical or artistic or creative as it used to be."

Yet, Stars found a way to creatively diversify their own vision of The North. Containing both anthemic and delicate songs,  The North is full of contrasts—from the recognizable tug of war between dark, moody lyricism and bright, poppy music to the play of singers Torquil Campbell and Amy Millan guy-girl vocals, which often tell two sides of the sentimental story, or complete each others' sentences, or just naturally harmonize, complementing one another.

Overall stylistically, The North is less than cohesive, much less so than their previous effort, the demure The Five Ghosts. But maybe this is exactly the strength of the record.

"I never listen to our records and I really liked this one," McGee laughs. "Once we've finished the record, I don't really want to listen to it anymore. I've listened to it maybe 400 times already; the last thing I need to do is listen to it again. But I don't know what it is about this one; it does jump around a little stylistically, but I find there is a continuity in there somewhere—there's something that ties it together. Maybe it's the way we recorded."