5 noteworthy things to do in portland's historic irvington neighborhood A 2010 addition to the National Register of Historic Places, Portland’s Irvington neighborhood is a slice of the American dream where luxurious porches and ornate entryways overlook expansive green lawns and sidewalk swings hanging from tree branches, sometimes with a secret treefort hidden high amongst the leaves as well.

Originally plotted as an east side suburb in the late 1800s, Irvington was designed to be a middle- to upper-class residential district where commercial activity was prohibited. Wealthy residents flocked to the area during the early 1900s, building some of the largest houses in the city and flaunting common period styles like arts and crafts, craftsman, colonial revival, prairie style and bungalow. For the first 25 years of the neighborhood’s existence, there were also strict conditions placed upon builders aimed at maintaining the area’s exclusiveness, such as each residence must cost at least $2,500, lots were a minimum of 50 feet, houses had to be 25 feet back from the property line, and no liquor production was allowed at neighborhood residences. The grandeur of this legacy has mostly remained intact as the quiet, tree-lined streets still offer an impressive display of early 20th century residential architecture, with some 2,800 properties—the largest historic district in Oregon—“of which 85 percent are considered ‘contributing’ and retain their original appearance,” according to the Irvington Community Association’s home tour, and almost no commercial activity. Of course, you can stroll around Irvington any time of the year (or take a virtual tour, or, if you’re ambitious, make your own walking tour based on photo tours from previous years) and enjoy the beautiful period architecture, but each May on the third Sunday, the official Irvington Home Tour gives you the opportunity to go inside some of these amazing residences. Owners do their spring cleaning and then open their doors to the public to raise funds for the Irvington Community Association (ICA). Running for 30 consecutive years, “the Irvington Home Tour is the longest continuously running neighborhood home tour in Portland,” according to its website, and the sole source of funds for the ICA. Learn about the more recent history of the neighborhood and the genesis of the home tour. 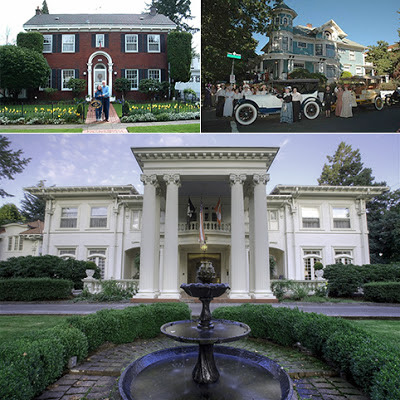 And if you actually want to take up temporary residence in one of these historic homes, take your pick of the refined, rustic simplicity of the bricked Georgian House, the opulence of Portland’s White House, or the Victorian charm of the Lion and the Rose. Each bed and breakfast offers a variety of gorgeous suites, standard amenities, and artfully adorned common areas, but The Georgian House is “one of only three true Georgian colonial homes in Portland,” according to its website, and features an English rose garden that was highlighted in Better Homes and Gardens. The Lion and the Rose also provides an English garden, but more impressive distinctions of the Queen Anne style mansion built in 1906 include the airy, Ionic-columned, wrap-around porch and the octagonal turret, visible between the tree branches to passing traffic on NE 15th Avenue. Yet, the grand approach up the circular drive to the Greek revival mansion style of the White House is a sight that welcomes you with 14 Corinthian columns and a three-tiered fountain.

---
Find three more things to do in historic Irvington on Neighborhood Notes.
Posted by pdxnoise at 15:22

Email ThisBlogThis!Share to TwitterShare to FacebookShare to Pinterest
Labels: irvington, local, neighborhood notes, to do