10 noteworthy things to do in portland's old town-chinatown 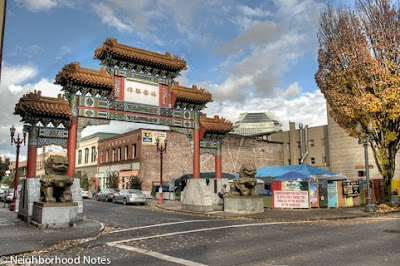 Portland’s Old Town-Chinatown presents a dizzying array of shopping, sights, eats and events as well as characters and characteristics, from serenely traditional to outlandishly artistic to rambunctiously drunken. Historically home to significant emigrant populations of Chinese and Japanese, today’s Asian influence is mostly surface only as just a handful of gift shops, importers and restaurants remain in the neighborhood.

Amongst all the activity and weekend merrymaking, there’s a seedier side—strip clubs and an adult theater—and a blunt reality to the area where a significant homeless population lives and human services abound.

Nevertheless, a few things are guaranteed every night of the week: The echo of live music always hangs in the air as does the aroma of deep-fried dough and crystallized sugar, each welcoming you to your destination even before it’s in sight.


DO: Tour By Foot or Bike

Jump in an orange PDX Pedicab for a 45-minute tour guided by an audio recording, or set your own pace with the Old Town-Chinatown walking tour. While each will take you by many of the major historical sites of “Portland's oldest neighborhood,” according to the Old Town-Chinatown Neighborhood Association, there are two more stops you can add to your list: Take a stroll up the north side of the Burnside Bridge and turn around once you’re over the water to view the neon White Stag sign, which welcomes you to Old Town as you drive across the river; and then head down to what remains of the oddity-filled 24 Hour Church of Elvis, on NW Couch Street between Fourth and Fifth Avenues, to push the buttons of the coin-op kiosk, which offers fortune-telling and marriage ceremonies.


PLAY: Game On at the Barcade 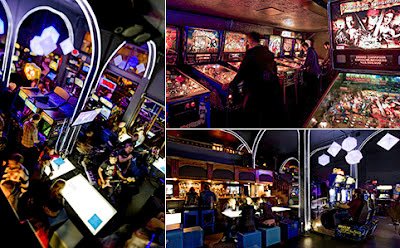 Founded by lifelong pinball and classic video game enthusiasts, Ground Kontrol “celebrates and preserves arcade gaming's ‘golden age’ by operating over 100 of the best video games and pinball machines from the ‘70s, ‘80s, and ‘90s,” according to its website, as well as offering a full bar and snacks, which you can put away while seated at glowing tables. Bask in the warmth of buzzing, chiming machines and the luminescence of the retro-futuristic, TRON-inspired interior where white- and indigo-hued fiber-optic lighting and LEDs line the stairs and archways as DJs spin a fresh variety every night. The long-running Rock Band Tuesdays, dubbed “karaoke for gamers,” will allow you to pick up plastic instruments and rock out using pro gear (microphones, guitar and keyboard controllers, drum mod), lights and sound (PA system, audio monitors), but before you head home for the night, be sure to make your way to the restrooms to check out the floor mosaics—Pac-Man and Ms. Pac-Man, respectively.


EAT + DRINK: Imbibe and Consume, Outdoors and In 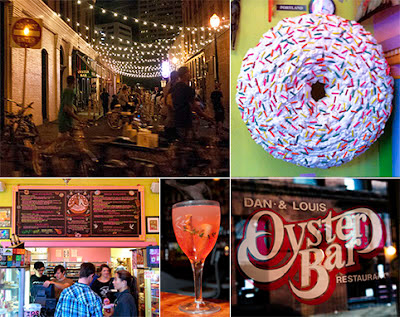 Taking a page out of the old town playbook of Europe, Portland closed off SW Ankeny Street between Second to Third Avenues to traffic in 2011, effectively creating a communal, open-air space where the surrounding bars and restaurants set up picnic tables. Sit outside with your bright pink Voodoo Doughnut box while mulling over the stained glass likeness of a bacon maple bar and the faces of Voodoo’s owners, as well as the late Ted Papaioannou, owner of neighboring bar Berbati and music venue Ted's, and then wash down that cereal-, cookie- or candy-covered sweet with a drink from the uber-hip art space Valentines, or a craft libation from Central as you watch the chef work a compact kitchen through the restaurant’s one alleyway window. The dim recesses of the new-ish industrial chic, speakeasy-style bar may be blocked by a curtain, but the large windows of next door's 105-year-old Dan & Louis Oyster Bar—Portland’s “oldest family-owned restaurant”—reveal shucked oysters and nautical paraphernalia, like a massive wooden ship's wheel that hangs above the bar in the The Old Shucking Room.

---
Find seven more things to do in Old Town-Chinatown, including art galleries, drag shows and live music, on Neighborhood Notes.
Posted by pdxnoise at 21:12