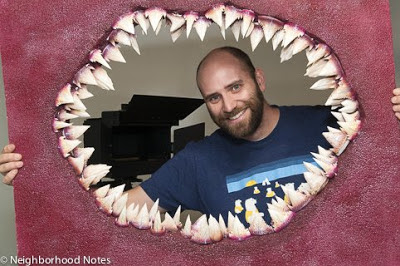 Self-starter is a good way to describe Jesse Blanchard.

“I started making movies about 10 years ago,” Blanchard says. “Just picking up a camera and a Final Cut Pro manual. Since then, I've made 50 shorts films, which have played at Cannes and been picked up by George Romero and Dimensions Films.”

Oscar-winning animators have also sung his praises and his first “3D short took home the Best of the Festival Award from the 2011 Los Angeles 3D Film Festival,” according to Blanchard’s bio.

This success can be attributed to Blanchard’s attention to detail and the fact that he also designed, built and patented his own 3D camera system using tools from the Southeast Portland Tool Library—and is now selling the Robert Rig internationally.

Working under his production company, Goat & Yeti, Blanchard has employed public, community resources to bring his business and creations to life as he continues to develop innovative ideas, only hindered by the finite number of hours in a day.

NN: 3D filmmaking seems like such an amazingly complicated but fascinating process. Can you briefly describe what it takes to actually film in 3D?

JB: 3D is really easy to do, and pretty hard to do well. All you have to do is record independent images (left and right) and then deliver each stream independently to each eye. The brain is what does all the 3D magic. What's difficult about 3D is feeding the brain information in a way that's easy for it to put together. If you don't, you give the viewer headaches.

NN: It sounds to me like one of the things that has been integral to your success in the 3D world is of your own creation—you design and build your own 3D camera rigs. What led you to create your own rig?

JB: Necessity. I couldn't afford the pro [camera] rigs, which are very expensive. Since then, I've learned enough about 3D to actually build the rigs that I want. Metal work has been a great skill to pick up.

NN: Tell me about the role the Southeast Portland Tool Library (SEPTL) has played in this process.

JB: The SEPTL was really instrumental—pun intended! Most of the time, I wasn't exactly sure what tool would work, and sometimes, I knew what I needed but didn't have it. Often, you only need to put one hole in something, but it has to be at a perfect 90 degrees. So, having a drill press from the tool library was crucial.

---
Read the rest of this interview with Jesse Blanchard and see a teaser for his current 3D project on Neighborhood Notes.
Posted by pdxnoise at 17:00