sasquatch! 2012 : four bountiful days on the hill at the gorge 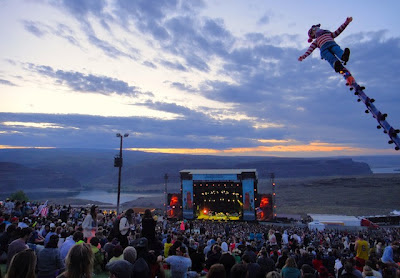 Another year and another whirlwind weekend at the 2012 Sasquatch! Music Festival is now in the books. The amount of phenomenal talent on all five stages (including the new "Maine" stage that featured NW hip-hop) spanned genres, intensities, and states of mind and being.

The weather was blissful and while the Banana Shack dance tent was consistently raging and often packed during all four days with the likes of Nero, SBTRKT, Awesome Tapes Africa, Tycho, Beardyman, LA Riots, Wolfgang Gartner, Purity Ring, Araabmuzik, Beats Antique, and Portland's very own Starfucker taking the stage, the best spot at the fest was on the hill soaking up the sun, the action on the mainstage, and the ridiculousness of wine guzzling Waldos, pants off dance offs, and the general mayhem that ensures when thousands of Sasquatchers start freaking out simultaneously to everything from energetic and schizophrenic dance makers like Santigold, Pretty Lights and Girl Talk (who dropped several Beastie Boys cuts into his mix) on night one; to indie rockers The Shins and Metric on night two; to harmony-filled groups of singer/songwriters like M. Ward, The Head and the Heart, Beirut and Bon Iver on night three; to Canadians and jokesters and a musical chameleon with Feist, Tenacious D and Beck on the final night.

But back to the beginning. The truncated day on Friday, May 25th may not have started until 4pm, but the fest packed in 18 bands, including many of our picks. Beatsmiths Pretty Lights, Beats Antique and Little People set their stages on fire as did the epic and beautiful sounds of Poliça and Explosions In The Sky.

But most importantly, our local love Starfucker had the Banana Shack so crowded you couldn't see the stage and the kids bouncing not only their feet to the drops but also an army of au naturel blow up dolls above their heads.

And that was just day one.