using 'voice as an instrument' : a q/a with mbrascatu's andrea algieri 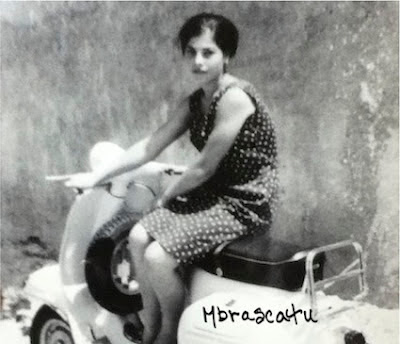 From Calabria to Firenze to Portland, Andrea Algieri's Mbrascatu is a fusion of the cobbled streets and cafés of the Old World and the creative melting pot of Portland, which brought the artists that play on the self-titled debut together.

If you've ever spent some time in Italy, Algieri's spirited vocals, expelling lyric after lyric in Italian, are enough to guide you down the winding alleyways and rich aromas of your memory. Even if you've only listened to a few Italian folk records, his strumming, alongside the distinctive bowing the violin and plucking of several other stringed instruments, will transport you to another place, and maybe even another time or season.

Pronounced mm-brah-ska-too, the name is actually the nickname of Algieri's grandfather, the man who gave him his first guitar, influencing Algieri's arc in more way than one.

Growing up in Southern Italy, band leader, singer and guitarist Algieri started to play music at age 8 "when my grandfather bought me my first guitar and I began composing," he says. "When I was 12, I started singing with a band and when I was 16, started writing lyrics to go with my music. I left my small village of Luzzi, in Calabria, when I was 18 and moved north to Florence, where I spent much time in live music venues. Together with a friend, I began to play and sing cover songs in local bars and restaurants. At the same time, off stage, I was focusing on songwriting and looking for opportunities to bring my original songs to the music scene.

"When I moved to the United States, I wanted to communicate that Italian music can be more than the same old favorites so I presented a set list that was entirely my own, and I found audiences with open minds that welcomed my songs. Thanks to the expansive Portland musical influence, my music has matured to a sound that is a mix of my Italian roots with my experience in the US."

Until then, Algieri answered a few questions for OMN about the himself, the band and their self-titled album, which you can stream below.

Mbrascatu is the family nickname of my grandfather, Gerardo Algieri, the same person who gave me my first guitar and one of the most important people in my life. Mbrascatu, the band, is a group of talented musicians that draw from very different musical backgrounds to create the band’s unique sound. Mathieu Lewis-Rolland, our drummer (who prefers to refer to himself as a "rhythmic choreographer"), was born in Quebec, Canada, but raised in Hawaii and Australia. He moved to Portland to pursue music and draws his skill set from many different musical genres. He also plays in two other Portland based bands, Glassbones and A Happy Death.

Michael Doherty, the bass guitarist on our album, likes to keeps us laughing with his clever sense of humor. He is originally from New York and currently also plays with the band Future Historians. Dylan Dean, our violinist, is an incredibly gifted human being. Although he has studied classical violin, his passion for all types of music is pretty abundant. He has a very "free" style of playing and is always coming up with great ideas for vocal lines and guitar parts. You would never guess that most of the time, you will find him saving lives in the ER at OHSU (seriously!). John Sabestinas, formerly of Sick Pony, is one of the first people I started playing music with in Portland, even before the formation of Mbrascatu. He plays anything with strings: banjo, ukulele, electric guitar, and lap steel just to name a few. It's really quite an impressive combination of very diverse musicians.