do people have the wrong perception of your neighborhood? 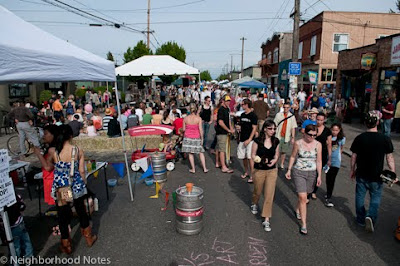 How do people react when you reveal which Portland neighborhood you live in?

Cully neighbor Justin Houk has been told that he lives in the "hillbilly part of Portland by people that live one street over in Beaumont," while University Park neighbor Christa Stephanie Denise relates that someone "straight up has said to my face where I live sucks." And who hasn't heard about the childless Pearl, gang-infested NE Portland, or crime-ridden Felony Flats?

Or worse yet, what if the mention of your neighborhood or business district garners no reaction at all, or people ask, “where’s that?”

Whether you live in a neighborhood known by its stereotype or not, many Portland neighbors and business owners are seeking to create an identity for their community or to change a negative perception of their neighborhood—to outsiders and insiders.

Although the area considered Felony Flats in Portland may not have defined boundaries, the Lents neighborhood has often been considered smack dab in the middle of this “undesirable” area.

“There are a lot of really pervasive false perceptions about Lents that are perpetuated citywide, mostly by people who've never been to the area,” Lents neighbor and community leader Cora Potter says, “and their reason for not coming is usually one of the incorrect assumptions or perceptions that they heard from another person or persons—so it's just a vicious cycle.”

Lents Neighborhood Association board member Jess Laventall echos Potter’s sentiments. “Often the only brands that have been applied to Lents have been labels from people who do not live here, or have only driven past Lents, or have only read about certain events in the news. It's unfortunate some people unfairly label Lents in the media where it often has high visibility, thus affecting even more underinformed perceptions.”

Thinking about your neighborhood or business district as a brand can give community members and business leaders the opportunity to assess the realities of their areas before determining which positive aspects to highlight for the city to see.

So, where do you begin the process?

The first step is to “assess the reality,” says communications consultant Brooke Preston of The Word Brewery. “What is the neighborhood’s reality, from insiders’ perspectives? Be honest—every neighborhood has assets and drawbacks.”

Business owners may have slightly different strategies and goals than neighbors for branding their sector, but on the whole, graphic designer Jeff Fisher of LogoMotives believes both “feel a need to brand a neighborhood to create a sense of community, give the area a recognized identity within the city, and convey and instill pride in that neighborhood.” Business districts may add the “desired results of bringing business traffic to the district and producing an economic impact,” Fisher says.

---
Find out more about assessing the realities of your neighborhood or business district on Neighborhood Notes.