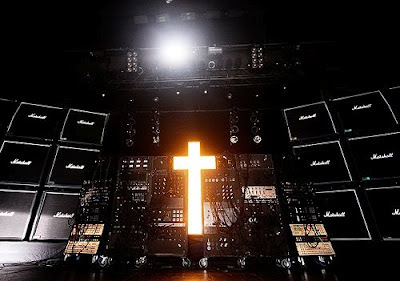 The second time Justice toured the States in March 2008, they brought along some filmmaker friends to document what happens "when a bunch of frogs gets dropped in dreamy America."

Dubbed A Cross The Universe after their debut †, the Parisian duo of Xavier de Rosnay and Gaspard Augé got themselves into more than enough hijinks. And amongst the blood, boobs, guns, arrests, and eardrum-singeing beats, the highlight of that tour may have come in Vegas, culminating in the impromptu, whiskey-swigging wedding between Gaspard and a groupie whom he had met just three hours prior (apparently an homage to Axl Rose). Watch 90 seconds of the NSFW trailer below:

According to The Guardian, Gaspard "misplaced his new bride hours after their nuptials. ('She tried to contact me,' he says with a shrug, 'but obviously I didn't do the paperwork when I got back to France, so I'm legally just married in Nevada.')"

Justice was quick to admit that these surely aren't their proudest moments, and things definitely got out of hand at times, but the movie is a document nonetheless.

Not out to repeat themselves on film or record, Justice's 2011 album Audio, Video, Disco distanced the pair from their disco-house dance roots and ventured into the territory of prog rock. The record has faced it's fair share of criticism, often regarding the sparseness and simplicity of the album—whether the songs aren't dancey enough, or there's too little cohesion or too many distracting bursts of '70s arena rock riffs—but as witnessed by their tour documentary and subsequent interviews, Justice has a casual, blasé attitude. What happens, happens and it doesn't seem like they harbor much remorse or apologies for past or present transgressions.

Besides, who cares about the critics anyways? They sold out their Portland show months in advance. Now at the tail end of their North American leg (the first US tour in two years), Justice hits up the Roseland as part of the Soul'd Out Music Festival on Tuesday, April 24th... the same night Coldplay is in town—think fans will have a hard time choosing?

OMN had the chance to catch up with Gaspard Augé via chat in the days leading up to their arrival in Portland.

Did you try to distance yourself from your last album (and maybe even electro-house music) with Audio, Video, Disco?

It's was not a conscious move. Obviously there are differences but we see more common points. To us it's driven by the same influences and obsessions—to make epic, romantic, melancholic pop music. The form changed a bit, but it's a natural evolution between the two records.

Right. So how is it stylistically different in your eyes (or ears)?

We wanted to have a roomy sound, with more air into music, and to make something violent without being aggressive, more laid-back.

I've read that you wanted this album to be simpler. How did you try to achieve that?

We don't think it's a simpler album music-wise, but we liked the idea that the sound has to be raw, with not much effects, a bit like a good sounding demo, at least in appearance. It has to sound effortless though we put a lot of effort.