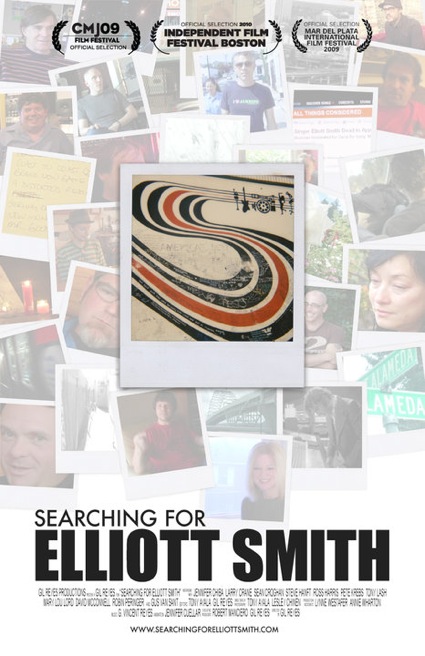 “Playing things too safe is the most popular way to fail. Dying is another way,” laughs Elliott Smith. “Or like… killing your emotions is another popular way… with you know, drugs or alcohol or whatever.”

Although Searching For Elliott Smith has screened sporadically since it’s release in 2009, the Gil Reyes-directed documentary will premier in Portland on Friday, October 21st as part of the NW Film Center’s 29th Reel Music Festival. October 21st also happens to be the eight-year anniversary of Elliott’s passing and Gil Reyes will be in attendance to introduce the film.

Touching on the major points of his career and his struggles with drugs, alcohol, depression, and fame, many of the stories are well publicized but it’s moving to hear them directly from the mouths of those that knew him best, working with him or standing by his side in his most intimate moments. Whether it’s a high school teacher remembering him as a great student (he was a National Merit Scholar) or fellow musicians remembering his early drive and ambition in bands like Stranger Than Fiction and Heatmiser, the film tracks each album Smith released beginning with his career-defining, 180-degree turn from noisy, post-grunge to whispery acoustics on Roman Candle. The angst, aggression and emotion in Smith’s music didn’t disappear, rather he expressed it lyrically, in a gentle yet macabre fashion.

The gems that really stand out in the film are the moments where you are really let into Elliott Smith’s life, via old footage Reyes has dug up or through interviews with his confidants. Larry Crane, Smith’s archivist who said Smith graciously gave him a co-producer credit on “Miss Misery,” discusses the musical genius of Smith in the studio coupled with a clip of his amazing skill as a classical piano player.

The chronology of Smith’s life and work is a nice retrospective but the most touching and private accounts come from former roommate Sean Croghan, who also struggled with many of the same depressive tendencies as Smith. He happily remembers Elliott’s dry wit, dark humor and idiosyncrasies as well as his indie music attitude–turning your back on the record industry. But he also reveals their shared suicidal thoughts and “young man’s disease”–a propensity to sabotage something when things got too good. As his fame grew, fucking up on purpose became an art form for Smith, and Crane also touches on this self-destructive notion. Smith would have to destroy something before he was satisfied; he was so talented that his first take would be flawless, yet, to make it unique, he’d have to carefully place his own mistakes within the recording–that was his form of perfection.