always on the road : a q/a with seattle’s the head + the heart 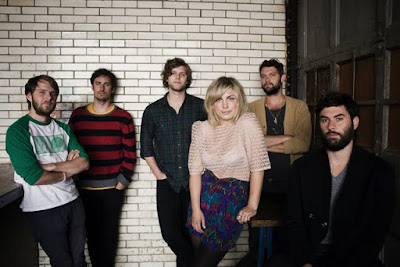 After months and months of touring supporting some of their “personal favorite bands,” Seattle’s The Head and the Heart finally got their first headlining tour. And although they enjoy playing the corner stages of pubs–much like the Ballard bar, Conor Byrne, in which they met on open mic nights–this tour is no small potatoes, even if their self-recorded, self-titled debut has the intimate, inviting feel of a small hinterland orchestra. As the indie folk-pop six-piece headlines mid-sized venues across the nation, selling out a few along the way, they’ll be in Eugene on Tuesday, October 18th at the WOW Hall and in Portland on Wednesday, October 19th at the Crystal Ballroom before wrapping it all up with a (huge!) homecoming gig at Seattle’s Key Arena.

As the venues and audiences increase in size, THATH is learning to invite the masses into their performances laden with delicate vocal harmonies violin melodies. As the energy and emotion is amplified by the pounding piano and percussion, the band transforms into an ardent choir that begs for the crowd to participate by singing, stomping, clapping, swaying, and cooing along.

OMN spoke to Charity Rose Thielen on the phone from Atlanta just after the band kicked off their current tour at Austin City Limits where their time was “really busy,” playing three shows in three days playing, which she called “three of the best shows” in recent memory. Watch a performance of “Rivers and Roads” live at ACL on September 18th, 2011:

Touring with openers Thao with The Get Down Stay Down and Seattle pals Lemolo, THATH is currently feeling like a tight, cohesive unit and the NW shows should be no different after that warm up.

Then again, the road is no place new for THATH.

Email ThisBlogThis!Share to TwitterShare to FacebookShare to Pinterest
Labels: crystal ballroom, seattle, the head and the heart, wow hall