following the nw to san fran for treasure island 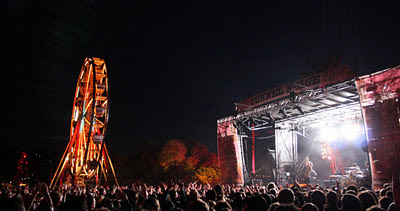 A weekend excursion to San Francisco doesn’t sound so bad, especially coupled with the fifth annual edition of the Treasure Island Music Festival–a fest which featured a handful of NW-bred acts (YACHT, Shabazz Palaces, Death Cab For Cutie, The Head and the Heart, and Stephen Malkmus & The Jicks) alongside Down Under dance (Empire Of The Sun, Cut Copy), riddling guitar work (Explosions in the Sky, Battles), sublime atmospherics (Beach House, Warpaint) and so much more indie rock, hip-hop, and electro with heart, soul and sweat.

Accompanied by the afternoon October sunshine and the wind whipping across the bay as concert-goers gazed towards the San Francisco skyline, TIMF 2011 was deftly curated by longtime SF purveyors of indie music, Noise Pop, which turns 20 next year. Alongside Another Planet Entertainment, the two have organized the nascent festival since 2007, booking a solid line up that truly fits Noise Pop’s indie ethos. From San Fran locals to blogosphere buzzers and hipster worshipees, the fest encompasses a fairly diverse swath of artists that attracted young audience members of all sects. With the pot smoke aplenty in the sea wind and everyone shelling out $9 for beers, here are a few highlights from Saturday, October 15th and Sunday, October 16th on Treasure Island in the San Francisco Bay. 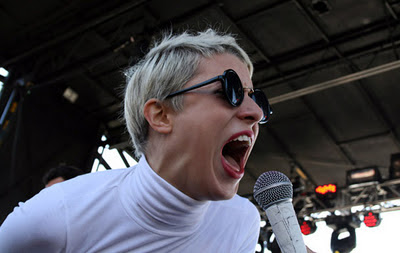 Flying from Iceland to San Fran to play for us: All who witnessed also joined the Kingdom of YACHT on Saturday. A Portland band that has grown exponentially over the last few years through constant touring and supporting DFA label mates like LCD Soundsystem, YACHT’s fleshed out full band, The Straight Gaze (which includes drummer Jeffrey Jerusalem and guitarists/keyboardists Bobby Birdman and Katy Davidson), has breathed new life into their old tracks and allowed them to be more innovative on stage. Jamming out on “Tripped & Fell in Love,” YACHT brings a feral, bouncing energy to stage every time–Claire L. Evans struggled to keep her skin-tight white dress from riding up as Jona Bechtolt has perfected his showy mic swing ‘n toss.

Spending most of her time teetering on the edge of the stage, Evans engaged and controlled the crowd, either with intensity or quips, querying if the audience had any questions for the band. ”What are my boots? They’re Doc Martens… I got them at the mall.”

Whether it was “Dystopia” or “Utopia,” YACHT played plenty of cuts from their latest Shangri-La, and of course, YACHT would cover The B-52′s’ “Mesopotamia,” sung by the latest addition to the band, guitarist/keyboardist Katy Davidson. 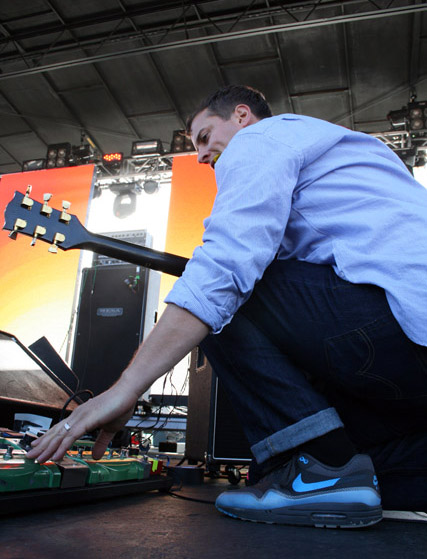 Holy Battles! How a three-piece keeps up such an insane pace while swapping so many instruments (like Ian Williams simultaneously playing two keyboards with a guitar hanging from his neck) and sounds/samples plus pedals and more… most will never comprehend. All three lined up against the front of the stage with the drum kit at center as the art/math rock experimentalists managed to be creepy and danceable at the same time, almost coming unhinged yet remaining cohesive. With drummer John Stanier reaching for the tallest cymbal from the lowest seat and Dave Konopka wrangling a bevy of bass, guitars, and effects, the entire performance was furious, leaving stage and lawn breathless. 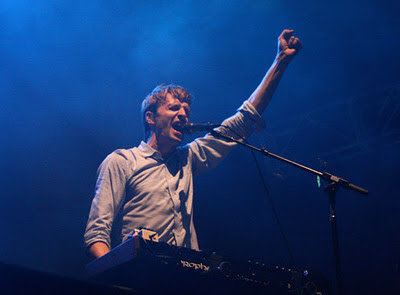 DJing the live set: Playing a truncated version of what they just delivered in Portland, the skinny, collared-shirted crew of Cut Copy orchestrates live sets that are transformative; and it’s all about pacing. The Aussie four-piece, with an additional touring percussionist, manages to blend and extend one song into the next, transforming beats live, reworking the material so the clip is seamless and always increasing.

Super tropical with guitarist Tim Hoey providing plenty of percussion himself, singer Dan Whitford opened his palms in a welcoming, “come hither” gesture; pointed his index fingers skyward and wagged them to the beat; or simply thrust his dukes to the sky, forearms bared, fist pumping to his own jams.

Cut Copy songs display a mastery of electronic ebb and flow, the breakdown followed by a build up until the track explodes. And these eruptions are all the more sensuously intense live, whether it’s one of many cuts from their latest Zonoscope or “Lights & Music,” “Hearts On Fire,” “Saturdays,” or set closer “Out There On The Ice.” On the final leg of touring behind Zonoscope, “yes, no, maybe,” we just didn’t want to hear that their time was up. 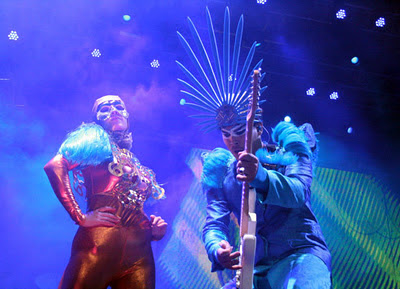 Most smoke, most costume changes: None other than Empire Of The Sun provided the grandiose ending to day one at Treasure Island. Narrating a futuristic tale, the exact story of which was lost but the elements that made it a musical spectacular (six costume changes for the four female dancers, a psychedelic video journey, props, capes, and hairy shoulder pads) were not.

It was an electro-musical fronted by Luke Steele strutting across stage in his tined headpiece, indulging in flamboyant guitar solos, giving the crowd exactly what it longed for. Dousing the stage in smoke from extinguisher-like hoses, Steele’s elaborate glam-influences felt most present on the downtempo ballad “Without You,” which felt like Prince crooning from Bowie’s mouth as Steele gazed out into the sea of people through a painted face, a stripe across his eyes.

Wonderfully active and theatrical, a blazing light show and the synchronicity of the dancers, even while wearing swordfish heads covered in lengthy blonde, mermaid locks, built and pushed the dramatic set forward until Steele stood silently, considering the audience’s cheers. ”Thank you San Francisco” and in a flash Steele turned and smashed his guitar leaving the white body dangling from the neck. (This was the final performance of their current tour.) Thirty minutes still remained in the set.

After several unsure moments, Empire Of The Sun returned for the set closer “Walking On A Dream” in Japanese-inspired costumes with Steele as a wild-haired samurai and his dancers geisha-like. But it was to be the final cut, leaving a sensational memory in their wake but also something to be desired as the set supposedly had 20-some minutes remaining. Exiting after several ostentatious bows, EOTS left the crowd with a feeling of needing more–more songs, or even another performance, as it was impossible to devour so many swirling elements in a single set. From the decorated, blue acoustic used to strum the opening chords to “We Are The People” to the Steele’s costumed support, viking drummer and Tarzan guitarist, it may be another while before we get our second act. 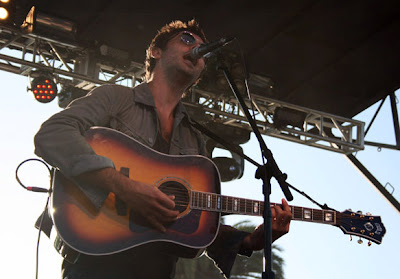 No better setting to watch Seattle’s The Head and the Heart as the audience basked in the bright sun radiating from behind the San Francisco skyline. Rich with singalong songs from their self-titled debut, the warm glow from the stage coupled with everyone clapping to the shakers and tambourines made THATH’s set feel like an old-time revival. Sharing a new song with an amazing violin riff, courtesy of Charity Rose Thielen, and a great drum and bassline, the whole lawn was humming along to the multi-part, guy/girl harmonies driven by sturdy backing chords on the ever-present piano and acoustic guitars.

The sense of love and community reorganized into a group hug and then a huge circle as it spread, culminating in an engagement. The couple spun around and around the inside of the circle until everyone collapsed inward to bounce together to the final building verses of ”Down In The Valley.” The wonderful slow build continued on closer “Rivers and Roads” as Charity was allowed a vocal moment to shine, leading the tingling chorus before the rowdy slamming of the kick drum and keys finished the song with a punch. 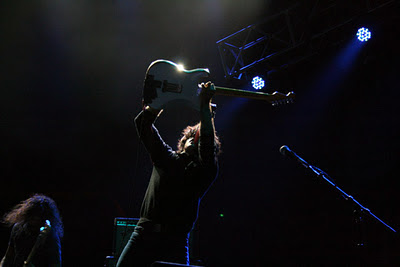 All or nothing: With eyes always downcast and of course hardly uttering a word, Explosions in the Sky created a complicated commotion of extremes. Minimum or maximum, always a million degrees emotive whether sitting cross-legged or kneeling–hunched over their beat up Stratocasters, introspectively communicating with their instruments–or shredding ferociously, a blur of hands in dim, colored lights. Munaf Rayani stood before the Texas flag, drapped from the largest Fender amp, with his guitar slung low almost seeming to graze his shoe tops as he swung from side to side like a pendulum.

An elaborate orchestra of clean and distorted, the four guitars, a stage floor filled with pedals, and drums crafted a ceaseless, intricate narrative that soared and dove, quietly wept and roared with rage. Haunting and full of sheer bliss, the intimacy, intensity and drama of Explosions’ guitar work could make you sweat in the cool night and also warm you up as the jelly fish, numbering 12, roamed throughout the audience to finish their set. 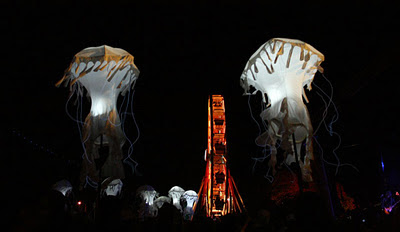 ---
Read the rest of the highlights on OMN and see more photos from day one and two.
Posted by pdxnoise at 10:42

Email ThisBlogThis!Share to TwitterShare to FacebookShare to Pinterest
Labels: battles, cut copy, empire of the sun, explosions in the sky, san francisco, the head and the heart, timf 2011, treasure island, yacht