Lead by Portland singer/songwriter Brian Hall and supported by wife Amy and friends, Sunbeam may be a fairly new band around town but their calm harmonies carry a confidence and a warmth like a ray of, well… a sunbeam. Self-releasing their debut album, Sunbeam & the Lovely Ghost, in August their rambling sweetness is typified by the stand out track “Honey” (below), a rhythmic effort that would sound good next to Americana-inspired folk rock like Blitzen Trapper or baroque-pop like Beirut:

The lovely melodies are helped along by band members Liz Palmer (keyboards/vocals), Charlie Morris (guitars/vocals), Adam Souza (bass/vocals), and Jon Collins (drums), and in their short career they’ve already shared stages with friends and collaborators like Nick Jaina, Norman, Mike Coykendall (She & Him, M. Ward), The Parson Red Heads, and The Ascetic Junkies. 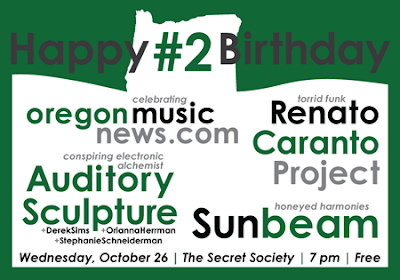 On Wednesday, October 26th Sunbeam will also be closing out Oregon Music New’s second birthday party at The Secret Society where they’ll share the stage with the funky Renato Caranto Project and electronic producer Auditory Sculpture with collaborators Stephanie Schneiderman, Orianna Herrman and Derek Sims. And it’s free so you have no reason not to show–plus there’ll be cake!

Sunbeam’s 10-track debut is “an album about love and estrangement and forgiveness and hope,” as described by Brian, that will leave you with an affection for more airs of a Sunbeam summer, especially as the months get colder and wetter.

Feel free to warm yourself up at OMN’s 2nd birthday party on Wednesday, October 26th at The Secret Society. Doors open at 7pm, show starts at 7:30pm with the Renato Caranto Project followed by Auditory Sculpture and Sunbeam. Get more details on the line up here; 21+, free.