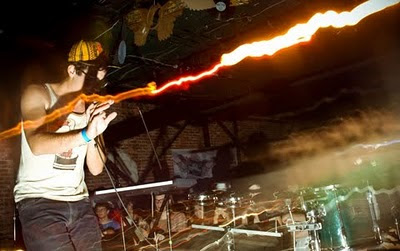 After three and a half years in Portland, Jeffrey Jerusalem (Jeff Brodsky) has definitely made a name for himself as a one-man, disco-pop dance maker and show starter while garnering international exposure touring the world as part of YACHT’s fleshed out live band, The Straight Gaze.

He dropped his debut LP, Grimace, in 2009, and the glitched-out, standout track “Disco Dry Mouth” is a staple at every JJ performance–hear it below. Following up the electro-diversity of that debut, he released an eclectic disc of remixes, This Is Why We Can’t Have Nice Things, for which he approached (mostly) Portland artists, including May Ling, Reporter, Wampire, Guidance Counselor, Nurses, and Atole, and re-worked their tracks.

A drummer at heart, Jeff Brodsky has become the de facto man for the aforementioned YACHT and Bobby Birdman. But live, as Jeffrey Jerusalem, he’s still a solo performer and maker of “detail-oriented, arty, computer, disco-pop,” as Brodsky says. The last time OMN saw him live at Backspace, Jeffrey Jerusalem premiered some fresh tracks that navigated tropical waters, much in the same vein as the new Cut Copy album (due out on February 8th), with plenty of auxiliary percussion and humid electro-experimentalism–enough to transport you to somewhere warmer even if you weren’t sweating it up on the dance floor.

OMN caught up with Jeff Brodsky to learn more about the little-publicized, highly dance-worthy man and what’s happening in his future, including a new 7-inch and his second full-length LP coming this spring… plus a music video recorded entirely on his iPhone.