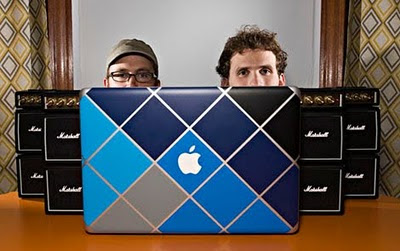 Mashup: A mashup or blend is a song or composition created by blending two or more pre-recorded songs, usually by overlaying the vocal track of one song seamlessly over the instrumental track of another. To the extent that such works are “transformative” of original content, they may find protection from copyright claims under the “fair use” doctrine of copyright law.

No one delves into the depths of “popular” music like the Chicago-based mashup makers The Hood Internet who take the layers of indie rock and pop and ever so deftly mix them with R&B and hip-hop. One listen to 2009's “Two Weeks Of Hip Hop” sees a graceful mashing of the harmonious, swirling indie-pop piano of Grizzly Bear with the raw, militant vocals of Dead Prez.

Two songs so diametrically opposed all of a sudden seem made for one another–like one is incapable of existing without the other. That’s the beauty of The Hood Internet.

After playing in bands throughout college and after, the mash up-ers began “making Hood Internet tracks for fun on the side,” says one half of the duo STV SLV (pronounced “Steve Sleeve” aka Steve Reidell). “Both of us had histories of constructing beats sampled from bands we liked, so turning them into mashups and putting them on the internet was largely a product of the era.”

The Hood Internet is composed of STV SLV and ABX (pronounced like three consecutive letters aka Aaron Brink) who have now released some 400 free mashups that have been downloaded millions of times via their blog. Kindling dance parties in cities across the US, they’ve been featured at Lollapalooza, Bonnaroo, Monolith Festival, SXSW, CMJ and Canadian Music Week. No stranger to Portland, they’re back on Wednesday, January 12th at Rotture.

But are mashups the only thing these laptop chemists have in store for us?

For now, you’ll just have to enjoy the honest-to-goodness quality of their mashes while an album of original material is forthcoming in spring of 2011 at the earliest.

OMN exchanged a string of emails with on half of The Hood Internet’s STV SLV, who you can catch crouched behind his MacBook on Wednesday night at Rotture.

Do your mashups include any original compositions? Or is everything borrowed?

STV SLV: Occasionally we’ll add some drum sounds or extra bass, but for the most part, it’s all borrowed.

How much time goes into a mashup? How many do you put out a week?

Depends on what we’re working with. Sometimes they come together really quickly, others take a large amount of fine-tuning. We try to put out a couple on the website every week, but that varies depending on what else we have going on. At this point we’ve made over 400 since the site started.

Email ThisBlogThis!Share to TwitterShare to FacebookShare to Pinterest
Labels: rotture, the hood internet