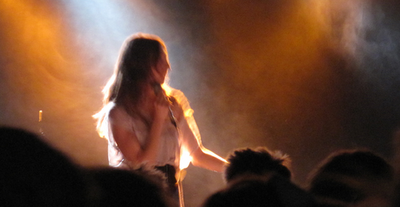 “Do I look like a pop star?” queried The Blow’s Khaela Maricich after her third song–the first new track, “Make It Up”–of the evening as she dug herself deeper into her tale of celebrity collaboration. “Do I look like a world-famous lesbian?”

The answer to both those questions is: Yes. In Portland at least.

The Blow didn’t reveal too much about her current live show–a combination between a solo, electro-pop act and a monologue–when we spoke to her in December so we just had to wait patiently for her first return to Portland more than two and half years, selling out the Doug Fir on Wednesday, February 2nd.

Immediately silencing a packed house with a simple tapping on the mic with her index finger, The Blow opened the show in a hushed, a cappella whisper before easing into her narrative: a fable of big city, Big Apple, can-do-anything romanticism where an eclectic Northwest pop artist gets mixed up with the most feminine of feminine New York/Hollywood celebrity and is asked to collaborate, to write the story of her lesbian love.

It’s already been well reported that The Blow is not working with Lindsay Lohan, and although her name was not mentioned a single time on Wednesday night, we all knew the celebutante in reference was Lohan, from fashionable to disastrous to the same-sex fling.

Completely alone on stage, save for a mic, stand and several conscientiously placed lights, and with narrative help from her “coach” and numerous voicemails along the way, The Blow told the story of the album she’s been writing for her celebrity partner. Sharing “demo” versions of the album that will never be released, The Blow alternated between new songs and old hits like “Hey Boy,” “Come On Petunia,” and “Fists Up” as she worked her away through some eleven “songs” in 60+ minutes.

Asking a lot from her audience to stay so attentive between three-minute electro-pop blasts, The Blow had no problem captivating the willing bodies even during the intentionally awkward moments–like the extended sequences where she fashioned a side pony into comb over or the attraction to the pulsating, life-invigorating light.

The music, new and old, lived in abstraction amongst a world of NYC cafés and soirées, supposed voicemails and secrets shared, sun bathing on an inflatable mattress...