no guitars, no pressure : q/a with little dragon’s fredrik wallin 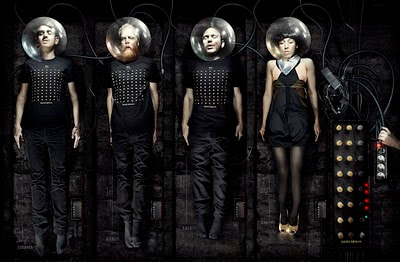 For a band that had to be coaxed into releasing their first vinyl, Little Dragon is doing quite well for themselves. The Swedish quartet from Gothenburg spent the end of 2010 touring the world with Gorillaz after being featured on two tracks (“Empire Ants” and “To Binge”) from the animated band’s third album, Plastic Beach, which wound up on many best of 2010 lists. Skipping across continents, Little Dragon supported Damon Albarn’s Gorillaz and De La Soul in Europe, Australia, New Zealand and Hong Kong on the Gorillaz: Escape to Plastic Beach Tour.

With no initial hopes or aspirations, Little Dragon continues to keep their cool and simply remain in love with the idea of “creating new sounds and making new songs” as bassist Fredrik Wallin puts it. Childhood friends since their teens and later living together in a cooperative called the The Seal Colonie in Gothenburg, the initial story of vocalist and percussionist Yukimi Nagano, drummer Erik Bodin, Fredrik Wallin, and keyboardist Håkan Wirenstrand can be found in their official bio by Ulla Tom Tom.

Their first single became the Rough Trade single of the week and the band was picked up in the UK by Peacefrog Records, which released their 2007 self-titled debut. And even though that first album is still available as an import only, fans immediately clung to the cool, down tempo jazziness of that album, garnering supporters across the globe from DJ Shadow to KCRW in Los Angeles.

Another album (Machine Dreams) came in 2009 and now Little Dragon visits Portland for their third time at the Doug Fir on Monday, January 10th with support from multimedia soundtrackers Billygoat (made up of Portland stop-motion artists and musicians David Klein and Nick Woolley). The hometown duo will not only open the Doug Fir date but also travel 25 dates (their first exposure to the greater world) with Little Dragon from west to east and back again finishing up with two dates in San Fran in early February. Joining Woolley and Klein on the tour will not only be their trusty projector and arrangements on harp, keyboards, accordion, glockenspiel and electric guitar but also their newest addition: Corey Nelson on live drums.

---
Read the rest on OMN and win tickets to see Little Dragon with Billygoat at the Doug Fir.
Posted by pdxnoise at 00:07