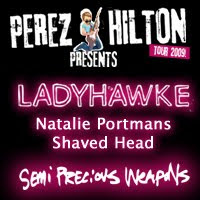 Co-headliners Ladyhawke and Natalie Portman's Shaved Head spread their lush decadence with grinding electro-beats that made the kids bounce and wiggle to Perez's delight.

Ladyhawke cooked up Kiwi-rhythms on the stage with her signature "big synths and big guitar riffs" reminiscent of the 80's. Heavy synthesizers provided the strength behind her dance-anthem "Paris Is Burning," and she pleased the Portland crowd with tracks like "Dusk Till Dawn" and "Back of the Van."

After much success Down Under and in the UK, Ladyhawke is sure to make a name for herself in America playing her synth-infused rock with flair and touring in support of her self-titled debut released a year ago.

The kids were clap-clap-clapping along as the quintet shook maracas, tambourines and pelvises to honeyed drumbeats and electrifying keyboards. Low-fi love spread thickly and quickly across the gymnasium stage for NPSH.

---
Read this article on CWG Live And Direct.