the cribs all but ignore portland

I'll forgo the warning since most people sit while using the internet.

The brothers Jarman of the The Cribs teamed up with the potentially post-Modest Mouse/ex-The Smiths' guitarist Johnny Marr for their fourth studio album Ignore the Ignorant. 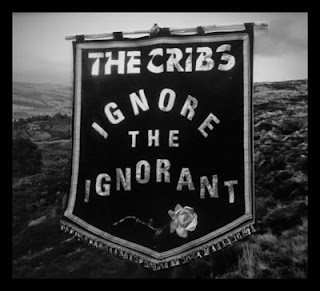 Okay, well now that the boys call Portland home, they've chosen to sell their limited edition Ignore the Ignorant: The Roses Edition in only three thorny cities in the world. Our fair Rose City included. (The others being Yorkshire and Lancashire, the Jarman's and Marr's respective home counties.)

Tell me something I don't know.

Here's your cue to stand up and jump around: The Cribs, with Mr. Marr in tow, crash Jackpot Records for an in-store set on Sunday, November 8th. Also your one of about three chances to see them in the western hemisphere this year. And it's free.

Come ready, in Marr's words, for "a two-headed beast" with double the guitar.

Ignore the Ignorant: The Roses Edition includes a live disc of The Cribs at The Ritz in Manchester, a DVD documentary of the album's recording, and The Serpent and the Peach–a silent short mostly filmed on a hand-held camera.