sxsw send off with archeology, the horde + the harem + andrew paul woodworth at jimmy mak’s 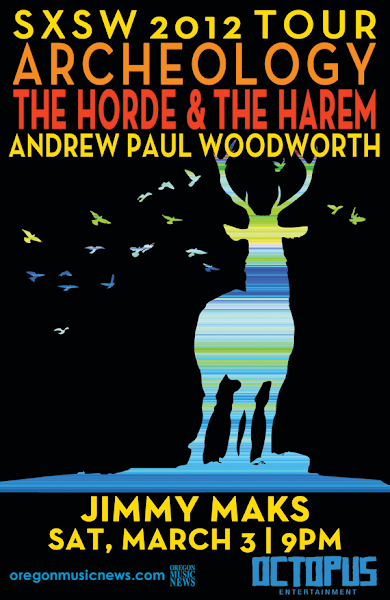 On Saturday, March 3rd, Oregon Music News and Octopus Entertainment will team up to send off two rising Northwest acts to SXSW. And in doing so, the indie rock invasion at Jimmy Mak's will kick off with Andrew Paul Woodworth—the LA via PDX via LO singer/songwriter who is also an OMN writer... and now broadcaster.

Let APW tell you about the March 3rd lineup with his first installment of Don't Go Camping (also available on the OMN podcast or iTunes):

As alluded to by Andrew, the Portland four-piece Archeology write "desert hymns" full of foot-stomping, hand-clapping, and chant-along melodies. Drum circle-inspired beats combine with playful, jangly touches and singalong lyrics. Including lead vocalist and bassist Daniel Walker, guitarist and vocalist Jason Davis, drummer Benjamin Haysom, and lead guitarist and vocalist Zach Dilday, listen to a few of Archeology's multi-layered, multi-part harmonies in our OMN/Octopus show sampler below, including a new track, "Piaute," from their latest EP Gamebird, which available at the gig followed by a post-SXSW digital release.

March 3rd will be Archeology's last home gig as they look south (aka Austin-ward), taking to the road with Seattle's The Horde and the Harem for a month-long trek to SXSW. THATH (not to be confused with the slightly more famous Seattleites THATH) will also be celebrating the release of their debut, full-length debut, A Long Midwinter, at Jimmy Mak's. The guitar/bass/keys/drums five-piece are known to include an exuberant horn (as heard in "Chasing Crows" above) as well as back-and-forth vocals shared by four singers—those not wielding sticks.

Warming up before the Jimmy Mak's release gig, The Horde and the Harem will take the record store stage at Music Millennium on the afternoon of March 3rd at 3pm.

And warming us all up will be none other than the Andrew Paul Woodworth. The LA via PDX va LO singer/songwriter is back in the greater Portland metro area... to stay?

---
Read the rest and win tickets on OMN.