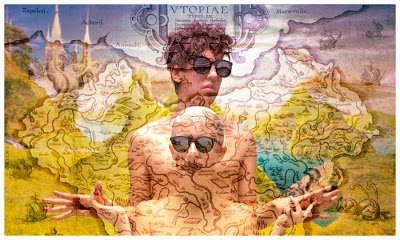 The first taste of YACHT’s upcoming full-length, Shangri-La, on DFA Records–the second on the renowned NYC dance label but fifth album overall–is here. The socially conscious “Dystopia (The Earth is on Fire)” is a song about disaster, natural and otherwise, in a world of earthquakes, floods, tsunamis, and oil spills–the song was actually written last May “around the time of the Deepwater Horizon oil spill,” says YACHT.

The message is clear, warning that the tides are rising, the skies are darkening, and our overconsumption will be our demise, but telling us in a synthesized, rocking disco boogie with analogies to jackals and lions, stuttered vocal deliveries from Claire L. Evans, and emphatic declarations of “Let the mother fucker burn.”

YACHT’s ideological philosophies (much more on this below) have always been ever-present, playing a central role in the unique atmosphere they create, but could “Dystopia” be more grown up? If anything, it’s definitely sleeker, losing some of YACHT’s signature artsy yet jarring aesthetic but quite possible more palatable for a larger audience, which they continue play for–including a spot at this year’s Coachella followed by an extensive North American tour after much exposure last year opening for LCD Soundsystem in Europe as well as playing the Hollywood Bowl alongside The Chemical Brothers and Chromeo.

YACHT, along with their backing band The Straight Gaze (featuring Bobby Birdman and Jeffrey Jerusalem), is becoming a finely tuned machine and this first listen of their new album might hint that the rough edges have finally been sanded into smooth corners. Or maybe not. YACHT likes to defy our expectations.

Shangri-La, due out on June 21st, “was produced, mixed, recorded, and performed by Jona Bechtolt and Claire L. Evans with our frequent collaborator and touring member Bobby Birdman, at the Marfa Recording Company, Jackpot! Studios, and in our temporary living quarters in Los Angeles, California.” And you can catch them in Oregon for the last two dates of their upcoming tour, May 14th at Portland’s Wonder Ballroom and May 15th at the Fort George Brewery in Astoria.