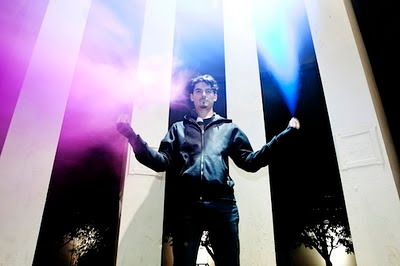 With more than a decade of beat engineering under a few monikers and countless collaborations and remixes, Eskmo (real name Brendan Angelides) is finally gaining a following worldwide after exposure in traditional media (BBC), the blogosphere (Brooklyn Vegan, XLR8R, Pitchfork), and clubs (alongside Flying Lotus and Amon Tobin). Next up, he’ll be opening for Beats Antique’s US tour on a month of dates including three Oregon stops, Ashland, Eugene and Portland, in the end of March and early April.

Striking an emotional chord, Eskmo says his style “sounds like a robotic tree would sound”–a perfect description of vibe he generates on his self-titled Ninja Tune debut, which dropped in October 2010. The organic and electronic cohesion is illustrated in sight and sound the first single, “Cloudlight” (video below, download track here), from Eskmo.

The Connecticut native but San Francisco transplant is inspired by “too much stuff to mention,” but his latest is “primarily about loss, gain, family, relationship, alchemy, love and stillness” and contains an enchanting palate of sounds, including “sticks being stepped on, soda cans, metal plates, etc….” Eskmo adds, “I record a lot of environments and natural sounds to incorporate into the songs.” (Listen to the whole album here.)

The album was written over a six month stretch “in the middle of a whole bunch of personal relationship-type stuff, a lot of deep life-experience type stuff happening that helped the music just bleed out of me. I just poured all those feelings into the music, it’s very cathartic. I allowed myself to let go of DJ structure – it’s not a ‘dance club’ album, because that kind of stuff hasn’t inspired me in years. This is the first full body of work where I’m singing all over it, and allowing myself to get over that furlough of expression has been really liberating.”

Your Ninja Tune debut features your own vocals a lot more than some of your past releases. Why did you decide to incorporate more of your own vocal samples on this album?

My last track of 2009′s “Let Them Sing” for Planet Mu really got me moving more in that direction. I just had a huge pull to let that side of me out. I almost felt like I made that track to say to myself: “Let yourself sing.” I knew it would drive some listeners off, especially since my background and influence is definitely not RnB vocals, which is all the rage. But it felt right to me.

You’ve explored a lot of territory with your music over the years. Tell me a little bit about the road that has led you to this point in your musical career.

I came from a band background, was introduced to electronic [music] in the mid ’90s and it took hold. I bought my first bass and 4 track and started writing in my bedroom. From there I branched out in various downtempo, then drum and bass and some heavier techno and gabber. Music was my fuel and kept me going.