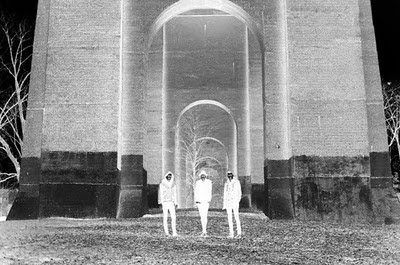 Brooklyn-based, “chillwave” trio BRAHMS performed their debut gig just “three months after we played the first notes together,” says lead singer and producer Cale Parks. “That’s when we became BRAHMS, at that first show at Terminal 5 in New York opening for Passion Pit” in January 2010.

Not bad for a band who until recently had only released four, hastily recorded demos. “We made these four songs to make a MySpace page basically to book shows as a new band.” Parks continues, “The new songs are nothing like the demo. It’s the same band but [in the beginning] we made a bunch of songs and knew we wanted to be a band but we didn’t have an album written.”

That album is now written, yet to be recorded, and being finalized while the band is currently on tour opening for Asobi Seksu, visiting the West Coast for the first time. (Plus they even share a couple of upcoming road dates with Starfucker before they hit SXSW.) Portland was spared the misfortune of missing the band as they recently had to cancel the three preceding shows “due to a family emergency” and are still on schedule to play the Doug Fir on Sunday, March 6th.

The latest offering of BRAHMS’ darkly atmospheric, surging style is the self-filmed music video for “Repeat It,” the B-side to their soon-to-be-released debut 7-inch. “‘Repeat It’ is like ’90s, Front 242 industrial gothic with actual melodies–a dance track but still our thing,” according to Parks. After shooting the footage themselves on their iPhones and surveillance cameras while on tour and while in Tokyo, BRAHMS first-ever video was edited by friend Adam Bennett.

The new BRAHMS tracks offer a bit of a departure from what early internet (and East Coast) fans heard on their demo. “It’s gonna be more chilled and atmospheric,” Parks says. “All the sounds are gonna be a little more intense, bassier” as reflected on the above track and the 7-inch A-side, “Add It Up” (listen below).

The difference is, the music BRAHMS is now creating has a definite vision; it’s survived a year-long gestation period. They are decidedly, especially in the live setting, “going less for ‘dance music’ like Hot Chip or Passion Pit or a dance show. It’s more about creating some kind of atmosphere,” says Parks, to get people thinking about the sounds. It’s passionate and introspective. “There’s definitely more to it than getting drunk and dancing.”

The rest of the new material for their future album is still in flux. While on tour, they band has lots of planning to do, figuring out how to finalize the songs and record them, but most of all, they’re looking forward to returning home to New York City in April, inspired to finish the record.

“All the songs are written so there’s no more writing in the studio as we go along,” says Parks. “But we’re taking our time, and I don’t think a year as a band is a very long time to work on an album, but I guess in today’s internet time, it is.”

Continually working on some 30 songs, the band now needs to choose which songs work together as an album. “In the context of the flow and vibe of an entire album, I think we’ve narrowed it down to 11 songs. We have no idea how it’s even going to be released. It’s still in such early stages but there is an actual album being formed now which is really exciting because you can see the picture and what it’s going to be like–just making it come true and happen and getting it out there.”

Putting out their debut album also includes managing their own style as they create photography, album art, and music videos. So far, they’ve done it all themselves. “Unless you control the way you present things visually, other people will try to do it for you,” simply states Parks. “It comes to the point where we do have people that want to help out and they’ll have a very good foundation because we will have presented that to them.”

Performing “solo music for a few years off and on” under his own name, Cale Parks, 30, (who formerly held down the rhythm sections of indie bands Aloha, White Williams and Cex) is a Cincinnati native but NYC resident for five years. Looking to put together a live band in October 2009 to back his solo project, he hooked up with Drew Robinson, who “I knew was looking to start something new,” says Parks, and Robinson’s friend and fellow Baltimorean Eric Lodwick.

In BRAHMS, Parks, who has a Bachelor’s degree in Jazz Studies and Percussion Performance, handles the beat production and all percussion as well as playing the keyboard and singing. On guitar, vocals and keys is Drew Robinson with Eric Lodwick providing bass, some synths, and backing vox.